Astronomically the start of spring this year was March 19th. Normally the first day of spring falls on March 20th or 21st. This was the first time in 124 years that spring fell so early. The spring equinox is the day that astronomers mark as the first day of spring and it is simply one of the two days a year that the sun shines equally over both the northern and southern hemispheres of the Earth. After the spring equinox, as the days grow longer and the nights get shorter, the average temperature rises. Many people associate warmer weather with the onset of spring, but the weather does not cause the seasons to change. The weather changes because the Earth’s orientation to the sun changes. I know there is a famous groundhog here in Pennsylvania who purports to predict when spring will start but I guarantee you it will start on March 20th in 2021, on March 20th in 2022, on March 20th in 2023, and on March 19th in 2024. Those are the days when the spring equinox as we have defined it will occur.

The spring equinox is one of the two days a year that the sun shines equally over both the northern and southern hemispheres of the Earth. Image: NOAA

Now that we have that out of the way, it is natural for us to look for signs that spring is here regardless of what the calendar says. It does get warmer as we go into spring, a change most of us look forward to. The rising temperatures and increasing levels of precipitation cause a change in the world around us. The trees begin to produce small buds of new growth that burst out with flashes of colorful flowers and leaves. Daffodils, crocuses, and hyacinths add more splashes of color and some wonderful aromas. The animals we see and hear change as well. Migratory birds that we missed all winter return from their winter habitats further south. In particular, the return of robins is seen by many as a sure sign of spring. Insects emerge from underground and fill the air with their buzzing. However, none of this represents the official start of spring. Only with the spring equinox can we correctly say that spring has sprung. But we all have our little signs that we look for anyway. For me, all winter I have been waiting for bats to emerge from their winter roosts because I wanted to test my new bat detector. On March 9th in Easton we hit a high of 72 degrees. The bats were out that evening and I got to hear their calls on my bat detector for the first time. For me, spring came early. How do you know when spring has arrived? 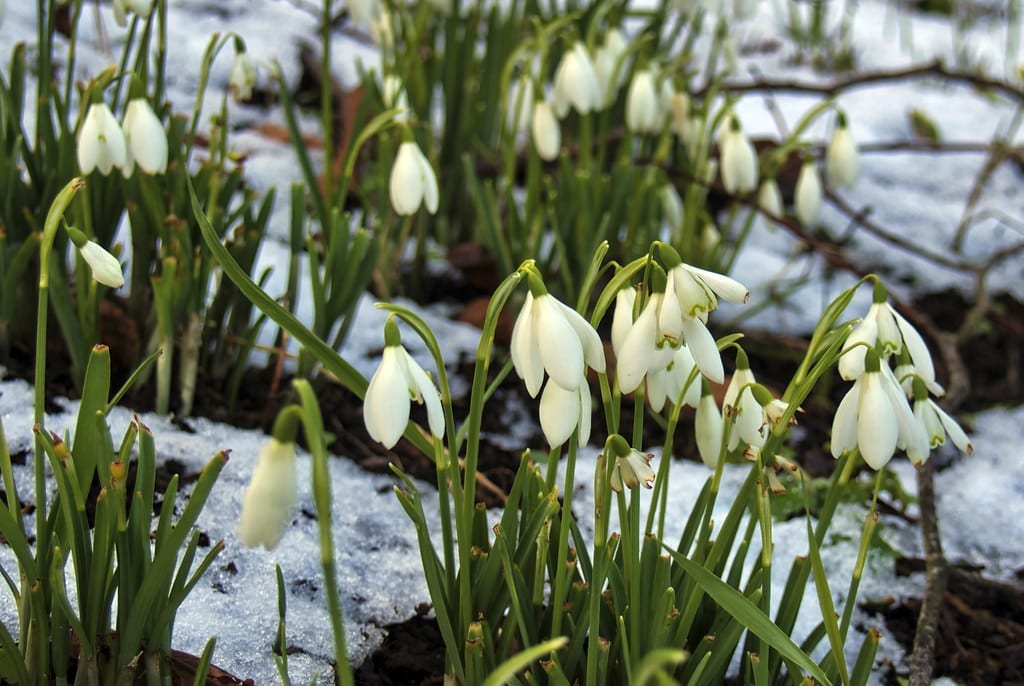 “Snowdrops in the snow, Winchester, UK” by neilalderney123 is licensed under CC BY-NC 2.0