Hello cyberspace, let’s talk about outer space. This is the first in a series of astronomy updates that we are calling “Whats Up” where I will point out interesting things in the night sky and talk a little about space news. 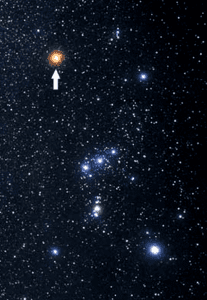 Let’s start by pointing out something you may have noticed on clear nights for the last few months. Just after sunset looking to the west you can see an extremely bright yellowish object. This is not a star but rather the planet Venus! Venus is the third brightest object in the sky after the moon and sun respectively. If you happen to own a telescope and you look at Venus you may be disappointed to find that no matter how powerful the magnification you can’t see any surface features. This is because Venus is permanently enveloped in unbroken cloud cover. If you do look at Venus through a telescope you might notice something surprising. Venus goes through phases just like the moon! Sometimes Venus appears as a thin crescent, and at the opposite extreme it can appear spherical like the full moon. Mercury is the only other planet that appears to go through phases but it is harder to observe tiny Mercury. Also in the west just after sunset, you may notice the constellation Orion. Orion is a winter constellation but it is visible in the early evening hours. The star that makes up the right shoulder of Orion is a red giant star called Betelgeuse. It’s the largest star visible to the naked eye and it used to be the 10th brightest star but in recent months it has dimmed dramatically. This unprecedented dimming led to predictions that Betelgeuse would explode in a supernova any day now. These predictions are correct, the star could explode any day between now and about 100,000 years from now. I’ll be waiting with bated breath. The truth is we don’t know if this dimming episode is a sign of an imminent explosion or if it’s something as mundane as a passing cloud of dust blocking some of the light. Fun fact, this star’s name used to be pronounced Bet-el-geeze but most Americans pronounce it like Beetle-juice today. This is due to the cultural impact of the movie Beetlejuice starring Mickel Keaton as the ghost with the most. For you early birds, about an hour before dawn looking southeast you will find three planets forming a nice grouping – Jupiter, Saturn, and Mars. Until next time, keep looking up.

“What’s up in the night sky” Comments