Have you ever seen a new development bring disruptive levels of traffic to a particular street, enjoyed a community event or festival, had a question about policing in your community, or even simply noticed that a nearby streetlight is out? These are just some of the topics that local governments at the county and municipal level make decisions about, and that you can have a say in by becoming more civically engaged. For the last few weeks, I have focused on getting more engaged with local government and events. Even during a pandemic, this has been an exciting experience and contributed to my sense of belonging in my community.

The first step in getting engaged is to get informed, so I started by compiling a list of all of the sources that could help me get an idea of what is going on in my community. My household receives a daily copy of a local newspaper, so I committed to reading that every day and followed a few other local news sources on Facebook. In talking to municipal officials for the CREATE Resilience project, NNC staff have heard repeatedly that social media is one way they try to provide up to date information to residents, so I made sure to follow my county and local government pages, as well as to sign up for email newsletters if they were available. I also found that the small borough I live in does not have its own Facebook page, but posts news items and announcements on their website, so I started checking that regularly. Finally, I thought about central community organizations and institutions – nonprofits, the police and fire departments, the school board – and followed them as well so that I would be aware of their activities within the community. Many places may also have a citizens’ group online where individuals can post about what they’re seeing in their neighborhoods and offer or request help for situations like a lost pet or a family in need. 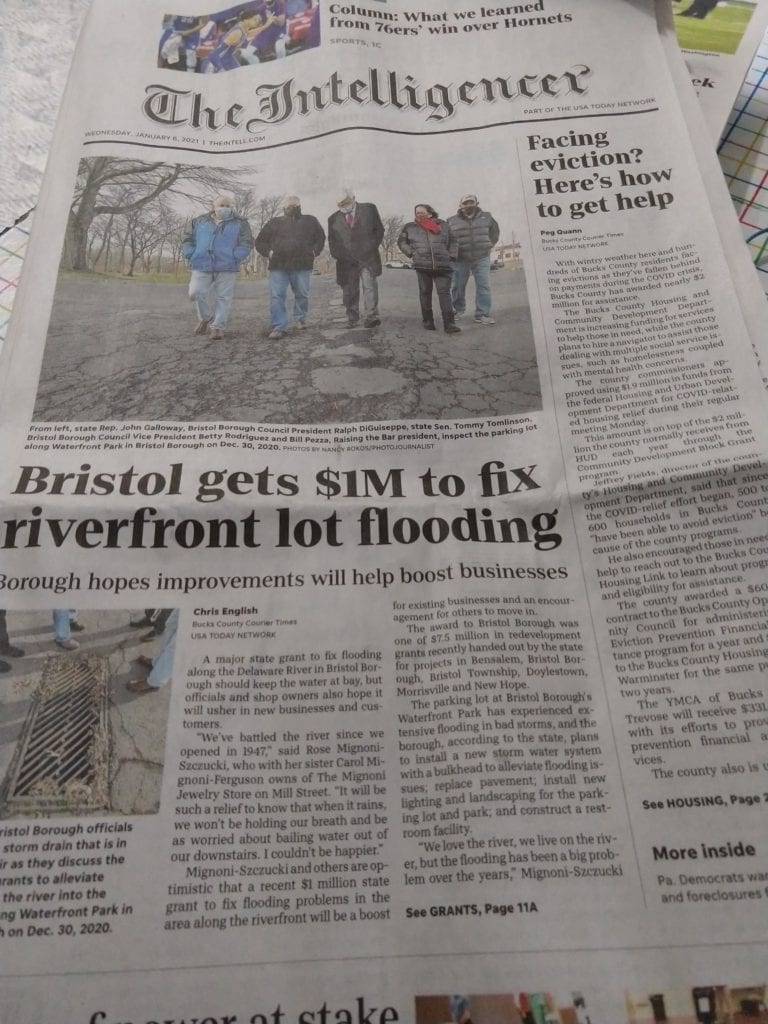 I found local newspapers – both in print and through their social media pages – to be the most comprehensive and detailed sources for community information, with municipal government websites and social media also providing important updates. The newspapers highlighted local community leaders and business owners, exposing me to new organizations offering services in the area and new businesses I might patronize to shop locally. Several stories highlighted philanthropic efforts or businesses’ creative measures to stay afloat during COVID, which made me feel like I had more of a finger on the pulse of how my community is responding to the pandemic. Of course, given current events, many articles about politics focused on the national level, but they also discussed connections to the state and county levels of government, and there were regularly articles about actions in PA’s state legislature. One thing I was surprised to find is that my newspaper dedicates about 2 pages on a daily basis to guest-submitted pieces – either longer opinion articles or short letters to the editor. This is a great opportunity to make one’s own voice heard, and I will certainly consider submitting my own thoughts in the future if an issue I am particularly passionate about is in the spotlight. Beyond informative articles, local newspapers provide a valuable service by running classified ads and public notices. The classified ads promote businesses, community events, job opportunities, and more, while public notices make people aware of upcoming public government meetings, actions of local government such as acquiring new property, and requests by landowners for variances to codes or zoning ordinances, as well as more personal items such as estate notices or notices that someone is legally changing their name. 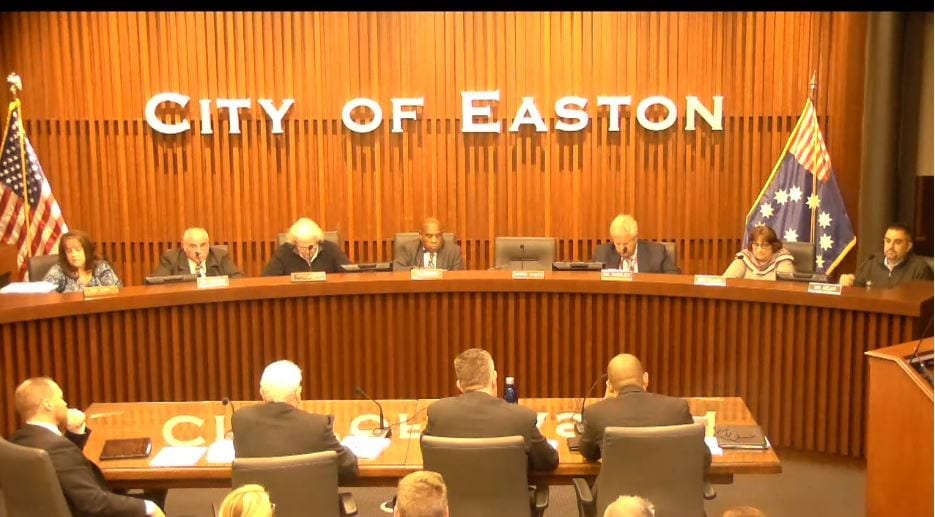 After putting in the effort to read about what was happening in my community, I certainly felt more informed. Knowing the current state of my community made me more confident in thinking about how I want my community to be in the future, which encouraged me to attend government meetings where local decision-making takes place. At the end of December, I looked up municipal, school board, and county meetings that were scheduled for the first half of January, when I was preparing this article. I planned to attend the council meeting for the Bucks County borough in which I live as well as the Easton City Council meeting, a meeting of my local Parks and Recreation Board, a Bucks County Planning Commission meeting, and a Northampton County Council meeting. Due to scheduling conflicts and difficulties with technology, I was only able to attend (virtually) the borough and city council meetings and the Bucks County Planning Commission meeting. This in itself was a good takeaway – you don’t have to attend every public meeting to be an engaged and informed citizen. You could pick the governing body that deals with the issues you are most concerned about and commit to attending their meetings, or find a timely issue you’re passionate about and attend a local board meeting, municipal government meeting, and county meeting to talk about it all in the same month. Attending one or two meetings to start might introduce you to new issues that you care about or lead you to additional ways of getting involved.

While they all followed a similar format, the content at each meeting I attended differed pretty widely. The County Planning Commission meeting was the shortest one I attended, and was mainly focused on introducing the new board members for 2021 and nominating board officers. I could only call in via phone, but the board members were on a video call, so it was difficult for me to follow along with who was talking. I suspect that meetings at different times of the year when different issues are on the table, or meetings specifically intended to gather public input, would be more relevant to me as a citizen. The borough council meeting for my municipality was interesting because I was the only guest, and the city officials and staff on the call remarked that they rarely have citizen guests and were excited I was there. It just so happened that they were discussing a new ordinance prohibiting parking on the street I live on at this meeting, so it was very understandable and personally relevant for me. I also recognized one of the council people as a regular volunteer at my polling place. This caused me to reflect on the fact that by getting involved in one capacity – whether volunteering or attending public meetings – I can really become more tied in to many aspects of my community, and get to know the other people I share it with. The council members also voted on a variety of matters, ranging from seeking bids for lawn care in the borough’s parks to plans to move a resident’s shed from an easement area where it wasn’t supposed to be in order to access the storm sewer. The Easton City Council meeting seemed most intended to inform the public of recent events. The Mayor, city council members, and staff provided updates on COVID, plans to address issues of homelessness within Easton, and the Winter Village set up in Centre Square this year. The Mayor additionally discussed his hopes and plans for the future direction of the city regarding affordable housing and a community center in the West Ward. 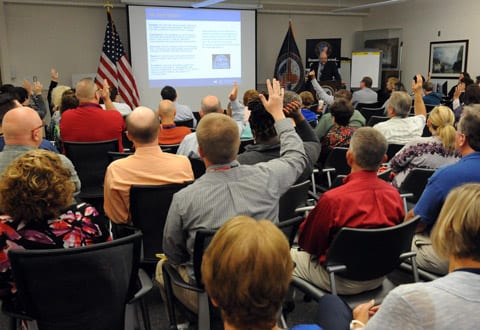 Another lesson I learned by attending these meetings is not to get discouraged if the format or jargon are confusing at first. Most government meetings operate according to some version of “Robert’s Rules of Order,” which is a guide for all types of formal meetings to structure the process of group members suggesting ideas, debating, and voting. If you aren’t used to meetings like this, unfamiliar mechanisms like making or seconding a motion or making a point of order can be intimidating. After attending a few such meetings, you will know what to expect and when in the meeting your chance to comment will occur. Additionally, the goal of these meetings is sometimes for the government or board having the meeting to plan and to address specific items of business, rather than to inform the broad public. For this reason, I sometimes felt a little lost because those running the meeting jumped right into a vote or giving a specific report without providing much context. However, the meeting agenda is often made available beforehand, and I found that skimming it and looking into the one or two issues that seemed most relevant to me helped me feel more engaged during the meetings.

Despite any initial confusion I experienced, each of the meetings I attended provided a window into how decisions that directly affect where I live and work are made. They spurred me to think about what I want for my community, and public meetings offer a platform to express those ideas to local leaders in the future. Seeing how few people attend these meetings emphasizes that one person’s voice can really carry weight in local government – and that there are also opportunities to get directly involved! Both my local borough and Easton were seeking volunteers to join various boards and committees (parks and recreation, environmental advisory, planning, etc.). You don’t need a background in public administration or politics to participate in local government in this way. Many people are driven to get involved by a particular issue that they feel strongly about, and then learn more about local government through their involvement. The Governor’s Center for Local Government Services offers many informational resources to help anyone better understand the functioning of their municipal or county government, and the Lehigh Valley Planning Commission even runs the Lehigh Valley Government Academy to train those with an interest in local planning. Municipal officials and interested residents can become certified Citizen Planners through this program.

Moving forward, I am sure to remain more civically engaged now that I have gotten past the mental barrier of attending meetings or seeking out this local information for the first time. The initial effort to do these things often stops us in our tracks – it’s easier to say that we don’t know when our city council meets or what they talk about than to research what’s going on in our community if we are not used to doing so. However, I found that initial effort paid dividends because in a world where it feels like so much is beyond our control at the national and global level, local engagement provides ways that we can really affect the quality of our lives and our communities. Beginning to dive into local government and civic engagement reveals a multitude of leaders and residents – our neighbors – who we can work alongside to bring about that positive change. I encourage everyone to find a way of being an engaged resident – you could start by reading the news and then write a letter to the editor in response. Or, you could attend a public meeting or volunteer at a community organization. The outcomes of getting involved are intrinsically rewarding and contribute to a sense of contributing to something larger than the self.