Looking for movie watching inspiration this summer?  Get the full scoop from NNC Outreach Educator, Jeff Mucklin, and docent John Cosgrove on their favorite science movies.  Share your favorites in the comments!

Jurassic Park is undoubtedly my favorite science fiction movie, in fact it’s my favorite movie full stop. Jurassic Park hit the theaters in June of 1993. That year I was just 5 years old. Like many boys that age I was obsessed with dinosaurs. I loved reading about these prehistoric beasts. To me they were like monsters and dragons, but even better because they had been real living creatures. I was thrilled by this movie then, and I still watch it multiple times a year now. Let’s look at a few of the film’s merits.

From a technical and artistic perspective Jurassic Park is a masterclass.

The movie is based on the book of the same name by author Michael Crichton. Crichton wrote science fiction that was grounded in reality, in fact someone said he wrote science future not science fiction. He created the central plot which revolves around the discovery of dinosaur DNA and the revival of these ancient animals through cloning.

The book was adapted into film under the direction of Steven Spielberg who was at the peak of his abilities.

Spielberg decided midway into production to take a chance on a new technology for the special effects shots of the dinosaurs. He would use a combination of robotic creatures built by Stan Winston Studios and computer generated images by ILM. Computer generated images or CGI have gone on to revolutionize how movies are made but this was the first major film to feature them. It’s remarkable that nearly thirty years later the CGI still looks completely convincing. I still feel overwhelmed when the protagonists and the audience get their first good look at a  Brachiosaurus thundering on screen.

The movie is scored by John Williams. You may not know his name but you know his music. John Williams composed the main themes for Jaws, Star Wars, ET, and the first three Harry Potter films to name a few. The main theme for Jurassic Park is particularly moving, filling me with a sense of wonder every time I hear it.

I could go on and praise the cinematography, the set design, and the acting, but I want to end by focusing on how science is used in this movie.

In the 1970’s paleontologist John Ostrom began arguing that dinosaurs may have been more like birds than reptiles. He argued that some of them were swift and agile hunters. Jack Horner found evidence that they may have cared for their young and moved in herds like animals on the African Savanna do today. The public was largely unaware of this debate and continued to imagine dinosaurs as big, slow, and dumb.

Jurassic Park weaves the cutting edge paleontology of the time into the movie in a way that actually managed to educate the public. The movie does take artistic license of course, velociraptor was about the size of a dog but is shown to tower over adult humans for example, but it got the science right more than it got it wrong.

Jurassic Park also introduced a lot of people to the concept of genetic engineering, a subject of heated debate now more than ever.

It asked questions that are relevant today. How much should humanity tinker with nature? Can computers be trusted with running more and more of our society? Should we do things just because we can? These are deep questions posed explicitly by Jurassic Park that have yet to be answered.

Although the movie does take a darker view of what science and technology can do when not guided by morality, in the end it does provide hope that life will find a way. 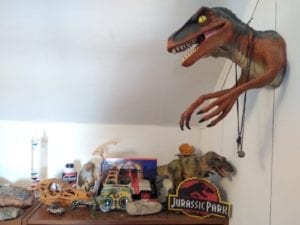 What’s my favorite space movie?  Hmmm…three come to mind: 2001: A Space Odyssey, Contact, and October Sky.  I don’t identify a single favorite as I like them for different reasons.  Books have been written analyzing 2001, both the novel and the film. I’d like to share some personal ramblings about this film.  I saw the film in 1968 when it was first released.  This was a time prior to any sort of computer graphics so the special effects were done with models and creative filming and editing.  I was so impressed with director Kubrick’s rendering of astronauts maneuvering in zero g, that a few years later, as a high school physics teacher, I showed clips from the film to my students.  It was a graphic finale to a lesson on why astronauts float in space.  The answer is subtle and “zero g” is misleading because, of course, there is gravity in space. The scene of the astronaut jogging around the walls of a rotating, wheel-like, vessel was a great example of using centripetal force to mimic gravity during the long journey to Jupiter.

Kubrick made marvelous use of classical music to create moods.  The Blue Danube Waltz was a dance between a space craft from Earth and the rotating space station at which it would dock.  The craft  initiates a rotation around its own axis so as to match the rotation of the space station as they waltz toward each other and eventually join.  Barber’s Adagio captures the feeling on loneliness during that months long voyage to Jupiter.  Listening to the Adagio all these years later still brings up that scene and that emotion.

There is a scene early in the film of an ape that undergoes an awakening, the realization that the animal bone he is holding could be used as a weapon.  Kubrick hinting as to where evolution may be headed.  The ape throws the bone into the air.  As it rises we see it morph into a cylindrical shaped space craft.  Kubrick has taken us eons into the future.  I see metaphor here that represents the best and the worst of science.  This July, 2020, will mark the 75th anniversary of the detonation of the first ever atomic bomb, a science and engineering endeavor that could trace its roots back to that very first weapon in the hand of our ancestor.  This year also marks the successful launch of Space X Dragon and the docking with ISS, feats that represent the best of science and engineering.

The psychedelic, trippy, ending of the film left me scratching my head, a bit confused.  But also left me with a sense of curiosity about our future as we venture deeper into space.  Almost a decade after this film, Voyager was launched on a journey that has now taken it beyond our solar system.