2017 has been quite the year for hurricanes and it is only a little more than half over at the time of this blog post (late September). Hurricane Harvey (late August 2017) was the first major hurricane to make landfall in the United States since 2005 Hurricane Wilma. It set the record for rainfall, with peak accumulation of about 52 inches, leaving widespread flooding. Hurricane Irma hit the Caribbean and Florida in early September as one of the most intense hurricanes with wind speeds reaching 185 mph. A hurricane is defined as a tropical cyclone with maximum sustained winds of 74 mph; a major hurricane has winds over 111 mph. Hurricanes are measured according to the Saffir-Simpson Hurricane Wind Scale as Category 1 through 5. Tropical depressions have winds of 38 mph or less and tropical storms have winds of 39 to 73 mph. Hurricane season is shown below and typically runs from late May/early June to December. It peaks in early September but can be very active August through November. 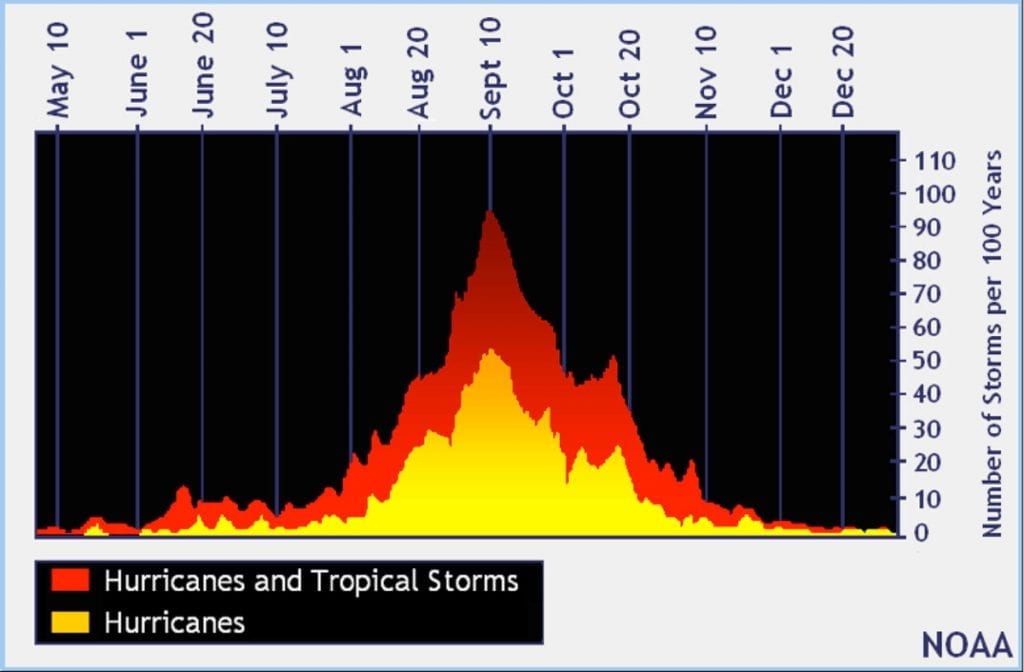 With back to back record breaking hurricanes, it may lead one to wonder if the changing climate is affecting the nature of these storms. I won’t go into the details of climate change in this blog post and only summarize that climate change is impacting the world currently, and will continue to do so into the future, as a result of increasing carbon dioxide and other greenhouse gases in the atmosphere which leads to global warming. The increase in these gases is largely from humans through fossil fuel emissions. Back to the hurricane/climate change question. There is some evidence to suggest that a warmer atmosphere affects hurricanes. Michael Mann, a Professor of Atmospheric Science at Penn State, stated that “We’ve loaded the dice. We’ve loaded the weather dice by warming the planet and intensifying these storms and raising sea levels to the point where a storm that we’ve called a 1000-year event … is now a storm that we expect to happen once in maybe 20 or 30 years.”

Climate change made Harvey more deadly. It did not cause Harvey or Irma but we can point to specific factors that lead to Harvey being more destructive. A warmer atmosphere holds more moisture which results in higher rainfall. Hurricanes get their energy from a warm ocean – they are thermodynamic systems that get energy from the ocean and expel it to the atmosphere (the ocean temperature decreased after Harvey passed through as a result). This summer the oceans have been steamy – hurricanes develop only above water warmed to 26 degrees Celsius. One of the foundations of thermodynamics is the Clausius-Clapeyron relation which basically says that for every degree Celsius of heat increase, the air holds 7% more water. In a warmer world, storms will have more rainfall.

The relationship between climate change and hurricanes is complex and there are many other factors that affect hurricane development including wind shear and air pollution. Dust from the Sahara Desert that is lifted high in the atmosphere during hot, dry summers can actually inhibit the development of some hurricane formation in the Atlantic. Despite all this complexity, it is very likely there will be more rainfall associated with these storms. With hurricane Harvey, some parts of Texas got all the rainfall they would normally get in an entire year in just one week.

Climate change worsens the impacts of a hurricane such as through extreme rainfall and high storm surge. High sea levels mean a bigger storm surge where the storm pushes the ocean far inland resulting in massive flooding. There is also a tentative connection with a general slowdown of atmospheric summer circulation which is a result of warming in the Arctic. This leads to storms lingering longer in a given place which enhances destructive impacts. Hurricane Harvey became slow-moving and pulled in lots of moisture from the Gulf of Mexico with heavy rain over several days.

While intensity of storms may change with climate change, the overall number or frequency of tropical storms may not change or may even decrease – the science is still uncertain at this point. Some other possible connections and impacts are a lengthening of the hurricane season and seeing more hurricanes earlier or later than usual. The science is complex on this factor so we can’t say for sure but this year Tropical Storm Arlene formed early (April). Additionally, storms could manifest in regions where they haven’t previously, farther from the equator with warming seas. Some studies have found a poleward shift of cyclones over the past 30 years, about one degree of latitude per decade. Storms may also intensify rapidly and could be larger in size (though the trends on these are less clear).

To recap, a warmer world (due to global warming) may result in more intense hurricanes with higher rainfall and storm surge, though the number of these storms may not change or could be less overall. However, even with less hurricanes the effect of having more intense Category 4-5 storms may increase potential damage in the Atlantic 30% by 2100 (see NOAA GFDL’s site for more details here https://www.gfdl.noaa.gov/global-warming-and-hurricanes/).

At Nurture Nature Center, we seek to enable resilient communities by educating community members about the local environmental risks. Being climate and weather literate, knowing how to prepare and where to get information are some of the foundations for resiliency. See our site www.focusonfloods.org for more information about our work educating the public about flood risks and what you can do to prepare.