Salsify – isn’t that what old timers call the oyster plant because it tastes slightly like oysters?  I found a stiff plant with a yellow flower that I identified as western salsify.  Same plant? Not quite.  Western salsify (trogopogon dubius Scop) sports a yellow flower while the salsify vegetable (T. pomfolius) has purple flowers.  Actually both are edible, but the latter is the one grown in a few gardens as a root vegetable.  Both are sometimes called goatsbeard.  In fact, not only do people eat salsify, but it is also eaten by white tail deer, pronghorns (out west) and a variety of smaller animals too. 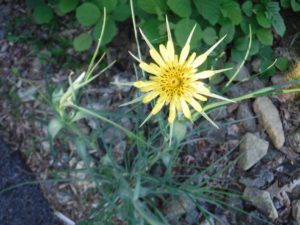 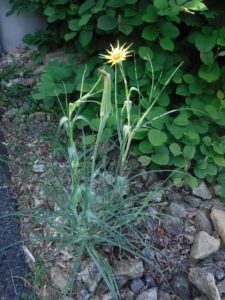 T. pomfolius has a black or white root, similar to parsnips but skinnier, which can be peeled and then cut into rounds to be mashed or used in salads or soups. Greeks and Romans are said to have used this root as a medicinal to treat gall bladder and liver ailments. T. dubius Scop was introduced as a garden plant from Europe in the early 1900s. It is found in disturbed areas or abandoned fields and sometimes, when the canopy fails in a forest, it is found in the open spaces among trees. Western salsify is found more often in the West, but it has been reported in parts of most states including Pennsylvania.

The structure of the plant is eye-catching. It has spare stalks and branches with skinny leaves. Single flowers open early in the morning and close shortly after noon.  It can be considered an annual or a biennial, but it dies as soon as it flowers and has released its seeds.  The flowers and seeds look like those of dandelions to which it is related.

I saw one western salsify two years ago. This year I found three.  I imagine the first plant seeded these as biennials.  I wonder if I will be seeing a mini-explosion of western salsify in two years.