Have you noticed lots of weeds 2-3 feet high with white flowers or rays around yellow centers?  They seem to be growing everywhere this year – in vacant lots, along roadsides, in gardens.

Eastern daisy fleabane (Erigeron annus) is prolific this year.  I have decided that some of it looks well in my garden, but fleabane has sprouted in other places like the lawn and next to the driveway where it looks like a weed.  A weed is a plant where you don’t want it, so I’m pulling those fleabanes out, but the garden specimens, all part of the aster family, are staying for the time being.

While being a native plant, given the right habitat, it can become invasive.  I think we had enough moisture in the soil that seeds were encouraged to germinate this year, more so than usual.  When it becomes invasive, it may crowd other plants or usurp the moisture other plants might use.

Eastern daisy fleabane, a native of the United States and Canada, is one of 191 species of fleabane.  Doesn’t the name sound like it gets rid of fleas? It has been considered an insecticide due to its odor, but it’s not very effective. It is, however, great at attracting bees, butterflies and dragonflies as a pollinating plant. 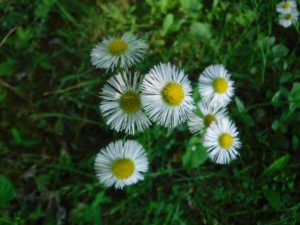 Another fleabane (Erigeron philadelphicus) has been used by Native Americans including the Cherokee, Houma, and Catawba for a variety of ills including as a poultice for headaches and as a drink made from the roots for colds and coughs and to treat heart trouble. Snuff made of fleabane is sniffed for head colds.

Think you’d like to encourage fleabane in your garden?  This plant blooms from late spring through the summer with flowers closing at night.  Gather some seeds and then scatter them where you will.  Pollinating insects will be attracted to your garden and you can enjoy their long blooming time.  As time goes on, you may have to discourage some fleabane from growing where you don’t want them, since they’re good at scattering seed themselves.  But maybe growing some “weeds” in your garden would be worthwhile.