Late winter is the time to prune many fruit-bearing trees and vines.  I took my loppers and a step ladder to prune my cherry trees, removing crossed twigs and branches to clear out the central area and provide more air circulation.

It was then I noticed a gummy substance leaking from a long “rip” on several branches.  This didn’t look good.  Research determined that I have bacterial gummosis or a specific kind of canker (pseudomonas syringa pv. Morsponorum).  It’s ice-nucleation-active which means that bacteria is the nucleus for the formation of ice.  That’s probably what caused the outer bark to split. The bacteria is most active from fall through winter into spring.

The more I looked at my two trees, the more infected branches I saw.  I did lots of pruning, disinfecting my lopper blades with alcohol between cuts.

The bacteria, if left to fester, will eventually cut off nutrients causing leaves to turn yellow and fall prematurely and reducing fruit production. 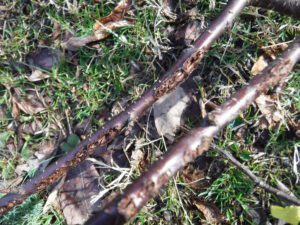 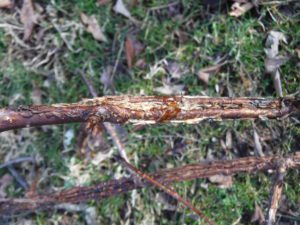 I am not a very good orchardist.  I used to have two apple trees, which the deer loved, but I grew less interested in them as time went by.  The mutsu apples were huge and not as tasty as I would have liked.  Growing fruits or vegetables requires constant surveillance. Aside from assuring enough water and nutrition, one needs to survey for insect and disease damage. I wasn’t very good at that.  I tried to carry out a spray regimen but the morning I should have applied a spray always seemed to fall at the same time as an early morning meeting at work. Then I inquired about growing apples organically and I learned it meant more surveillance than I’d already been doing.

About that time I was traveling through apple country in the state of Washington. All the apple trees were cloaked in clay giving them a ghostly appearance.  The clay coating protected the trees from disease and insect damage. No, I don’t have time or money to invest in that venture.  So the apple trees were allowed to live as long as they could and I used the disfigured apples for applesauce or threw them on the ground for wildlife to enjoy.

I wonder if climate change is working against me and my little orchard.  We in the northeast have been getting a lot of rain. Too much moisture is at the root of some of my problems.  I applaud farmers who are successful producers of fruit.  It takes knowledge, skill and perseverance to supply us with fruits we enjoy eating.