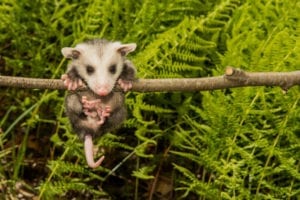 The opossum, which is the only marsupial (pouched animals, like kangaroos, wallabies, platypuses) found in North America, is a native animal that can trace its roots to ancient South America. All of the marsupials that we associate with Australia can actually trace their family trees back to South America. Through processes like plate tectonics (movement of the Earth’s crust) prehistoric creatures have spread across the world and, sometimes, vanished in other areas. Camels, for instance, evolved in North America but became extinct here just before the last Ice Age. Earlier camels had migrated to Asia and to South America, where they evolved into llamas, alpacas and vicunas.

But opossums survived in North America and are now common sights in most parts of the United States and Canada. They are nocturnal creatures (active at night) and scavengers, often invading garbage cans and trash piles. The most important part of their diet (for us, anyway)are parasites that spread Lyme disease – ticks! Opossums can devour 4000 ticks a week, and they rid themselves of 96.5% of their own body ticks. That’s a lot of parasites that are not alive to transmit disease to humans. Also, they seem to have great resistance (some say immunity) to Lyme disease, as well as, rabies. Currently, scientists are studying opossums, trying to develop protective treatments for humans.

And, yes, like most marsupials, opossums have pouches. They carry their young in their well-developed belly pouches until they are mature. They also have prehensile tails on which they sometimes carry their young. If bothered they may also “play dead.”

So try to appreciate opossums and their important, beneficial place in our ecosystem.