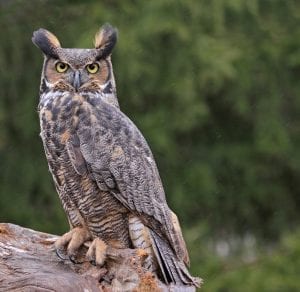 Did you know:
– that owls have ears that are unevenly located on the sides of their heads? Most nocturnal (night-time) owls have offset ears, higher on one side than the other. This allows sound to arrive at one ear microseconds before the other, and helps the owl, along with its enormous eyes, to locate its prey. Since owls cannot move their eyes and must rely on head rotation for visual coverage, their augmented hearing allows them to triangulate (geometrically locate by sound) and makes them extremely effective nocturnal hunters. 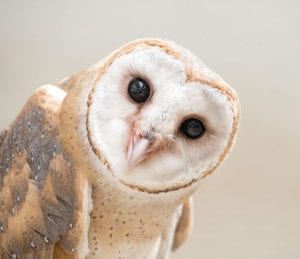 Did you ever wonder:
– why owls’ faces are flatter than other birds? Owls are said to have “satellite” faces (shaped like a satellite dishes). Their cupped appearance is formed by a facial feather ruffs that helps to funnel sound to the owls’ offset ears. The “ear tufts” that great horned owls and other species have are not actually ears or horns, but may contribute to owls’ hearing. Researchers believe the feathery tufts work by increasing the sound-reflecting surface.

Why should we care about owls?
Owls are very effective night hunters and keep rodent populations under control in both rural and urban habitats; this also helps to curb the spread of disease, pests and parasites. However, owls are decreasing in numbers because their existence is being affected by habitat destruction associated with agriculture and development,as well as, poaching. We need to save owls, and one good reason for this is because they play a part in and help us to maintain healthy human habitats.