Ah, a late summer evening. The air is still warm even though the sun set hours ago, crickets are playing their nightly symphony as lightning bugs send messages of love to one another, and you’re looking up at a cloudless sky with a bit of humid haze. As you gaze into the darkness you see a flash of light streaking overhead. It’s a shooting star from the Perseids meteor shower.

The Perseids meteor shower happens every year starting in mid-July and peaking in early to mid-August. This year the peak nights will be the 11th, 12th, and 13th of August. The very best time to see the shower will be in the pre-dawn hours after midnight. During that time this shower is likely to produce an average of 60 meteors per hour. The number of meteors will then decline each night, but some may still be seen till late August. 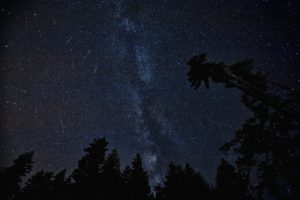 You don’t need any special equipment to observe this natural lightshow, in fact a telescope would really be counterproductive as you are more likely to see shooting stars if you are observing a large patch of the sky with your naked eyes.

You will want to find as dark a location as possible with as few obstructions as possible. Allow your eyes about 20 minutes to become fully dark adapted and then just keep looking up. The Perseids is named after the constellation of Perseus, which is where all the meteors appear to originate from as they flash across the sky. You do not need to be able to identify Perseus to see this meteor shower. The best place to look is straight up no matter where the origin point is. To avoid neck strain, bring a towel so you can lie on the ground or a reclining chair.

Meteors, or shooting stars as many people call them, are actually asteroids that have been traveling through space for thousands or even billions of years. When asteroids enter the Earth’s atmosphere, they are called meteors. Meteors heat up as they collide with molecules of gas that make up our atmosphere and smaller meteors completely vaporize 50 miles above our heads, producing a bright streak of light as they do so that we can see from the ground. Larger meteors survive this heating and make it all the way to the ground and are then called meteorites.

Meteor showers occur very predictably as the Earth passes through debris clouds left by comets. Comets are made mostly of ice and small dust particles and are normally found beyond the orbit of Neptune. Some of them are on elliptical orbits that briefly bring them into the inner solar system occasionally. When this occurs, their ices vaporize and they form a brilliant cometary cloud and tail made of dust and gases.

The Perseids are caused by the comet Swift-Tuttle, which last passed through the inner solar system in 1995. It takes comet Swift-Tuttle 133 years to orbit the sun and it won’t be seen in the inner solar system again until 2126! The Perseids meteor shower occurs every year as we pass through that debris cloud and at around the same time each year so you can start a tradition by observing this meteor shower every August.

The Perseids are not the only meteor shower that occurs every year. Each meteor shower is named for the constellation the meteors appear to come from. Peaking October 8th is the Draconids, October 21st we have the Orionids, November 5th is the South Taurids followed closely by the North Taurids November 12th, then November 17th is the Leonids, December 14th is the Geminids and finally December 22nd is the peak of the Urids. Going into 2022 we have the Quadrantids on January 3rd, April 22nd there’s the Lyrids, May 5th we have the Eta Aquariids, July 28th we have the Delta Aquariids, and that brings us back to the 2022 Perseids peaking once again on August 12th.

Although there are many meteor showers every year the Perseids is one of the more predictable and steady meteor showers. It also occurs during the warmer months when it’s most pleasant to lie down under the stars for a few hours to watch a celestial fireworks display.