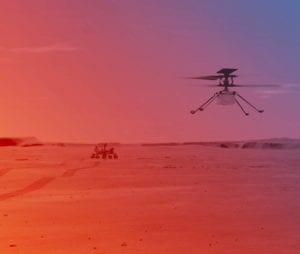 Ingenuity had to be custom built to make this possible but it was made with off the shelf parts that are widely available.

Like helicopters on Earth, Ingenuity will achieve lift by spinning rotors. Unlike most helicopters it will have two counter rotating rotors instead of a lift rotor and a tail rotor. In this way it looks more like a drone or the toy helicopters that are now so common.

The Ingenuity helicopter has tough rotor blades made of foam and wrapped in carbon fiber that are strong enough to handle the stress of spinning five times faster than a rotor would need to spin for a helicopter on Earth. That’s 2,300 revolutions per minute. Despite this speed and strength the four foot long blades only weigh 35 grams each, or about as much as a slice of bread!

The helicopter is powered by a solar panel above the rotors which will be used to recharge the lithium batteries that will power it during its 90 second flights. The panel is small and will take a full Martian day to recharge the batteries for another flight. Actually only about one third of the power is used for flight. One third goes to onboard electronics like flight computers, navigation cameras and communication equipment. Another third is needed to keep the batteries and sensitive electronics warm during the Martian night which dips down to -140 degrees Fahrenheit and would destroy the helicopter if it wasn’t heated and well insulated.

The entire helicopter only weighs four pounds on Earth and because Mars has weaker gravity it will weigh less than three pounds on the red planet, which helps it fly in the first place.

The Ingenuity helicopter is a smaller part of the Perseverance rover which landed on the surface of Mars on February 18th 2021. Perseverance is building on the legacy of previous landers and rovers as it learns more about the geology and history of Mars. Perseverance is exploring a crater that was once a river delta and could have fossilized signs of life if Mars ever had any living organisms.

Perseverance also has a technology demonstrator called MOXIE which will generate breathable oxygen gas from the Martian atmosphere. This kind of technology will be vital for any human explorers eventually sent to Mars.

Ingenuity is only expected to fly five times, though with luck this may be extended, but during its few flights it will take high resolution photos of the geology near the Perseverance rover. These photos will help scientists better understand the lay of the land and select interesting features to study in the future.

NASA hopes to one day build larger more capable drones to explore the surface of Mars more quickly than any rover ever could. The flight data from Ingenuity will be invaluable to future engineers designing these larger drones.

The Ingenuity helicopter will fly in air as thin as the Earth’s atmosphere at an altitude of 100,000 feet. The highest a helicopter has ever flown on Earth is only 40,000 feet, so this little helicopter may even advance the field of aviation here on Earth!

In honor of the Wright brothers historic first controlled flight, the Ingenuity helicopter carries a small piece of the wing of the 1903 Wright flyer. What an inspiring example of how far humans have come in such a short time.