Sustainability often brings to mind solar panels, tree planting, and LED light bulbs. While these are important pieces of the puzzle, sustainability is also about coming together to create communities and societies that can continue to ensure quality of life for all for generations to come. This requires imagining the future possibilities for our community and starting to build long-term plans to work towards those possibilities. The West Ward Community Initiative, a program of the Greater Easton Development Partnership (GEDP), has supported local organizations and residents of the West Ward neighborhood (6th to 15th Street and Butler Street to Jackson Street) in Easton in doing just that. Amy Boccadoro, who manages the West Ward Community Initiative, explained the process of engaging the community in creating the neighborhood plan, the programs that have resulted so far, and what future developments are on the horizon. 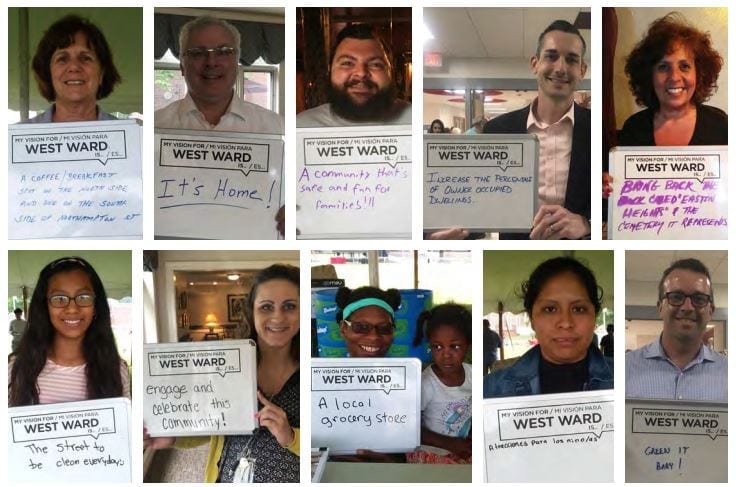 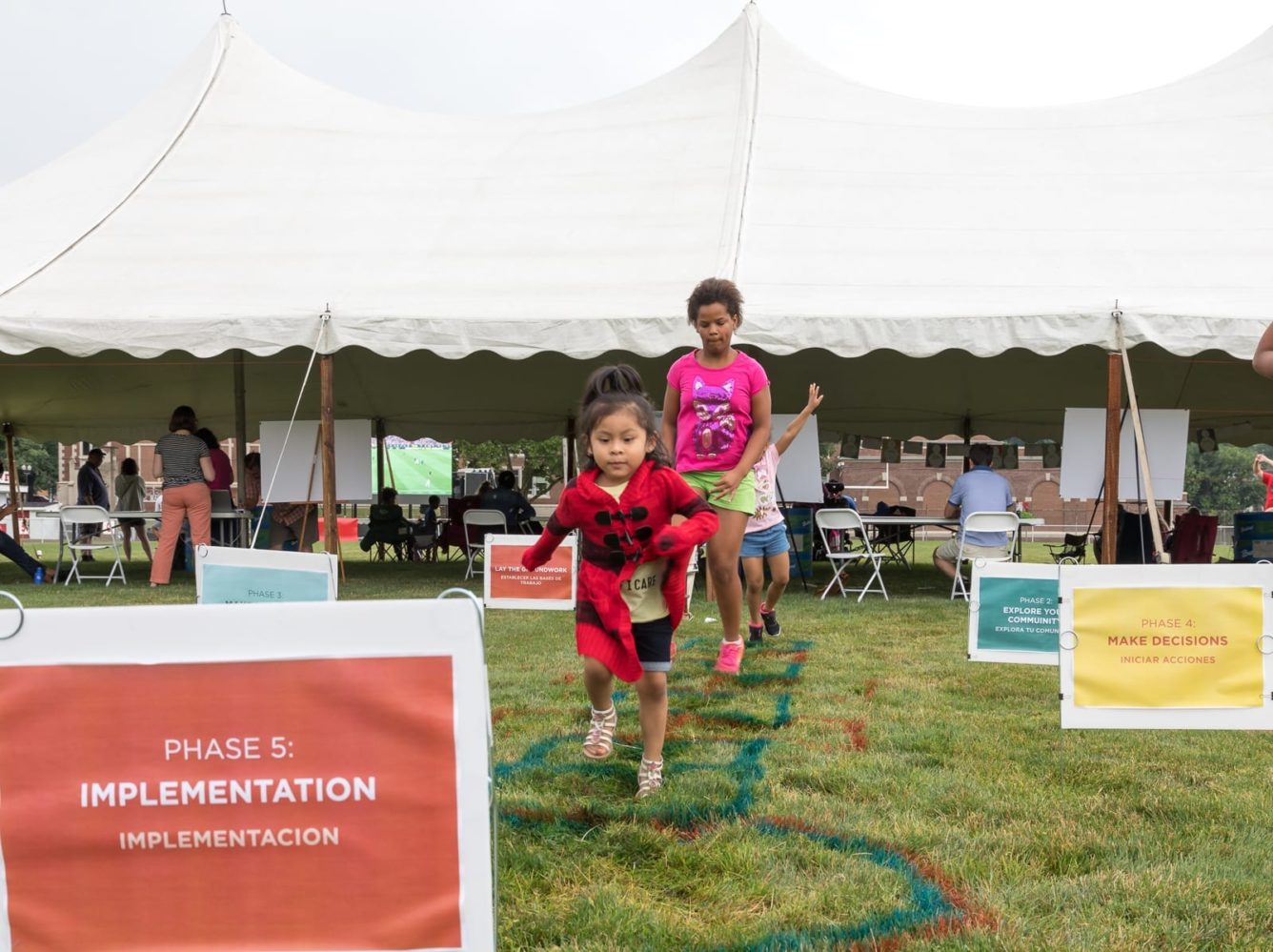 A World Cup broadcast was both a fun community event and an opportunity for the community to engage with the creation of the neighborhood plan. Photo Credit: Katja Kruppe

In 2018 the newly formed West Ward Community Initiative, along with a consultant, held a kickoff meeting at Paxinosa Elementary School for people to come share their hopes and ideas for the neighborhood. This meeting sought information about things community members were concerned about, like difficult street intersections, and things they wanted to see, like improved green spaces. From this foundation, the West Ward Community Initiative and consultant continued to gather community expertise on more specific proposals and potential programs to create a neighborhood plan. They also showed that community engagement can take many forms, including a movie screening on the lawn at Paxinosa and a broadcast of a World Cup game outdoors at Cottingham Stadium where attendees were asked for their input for the neighborhood plan. Despite a heavy rainstorm at the beginning of the game, Amy says, this and other engagement events were very well attended. People find it rewarding and important to contribute to their community. 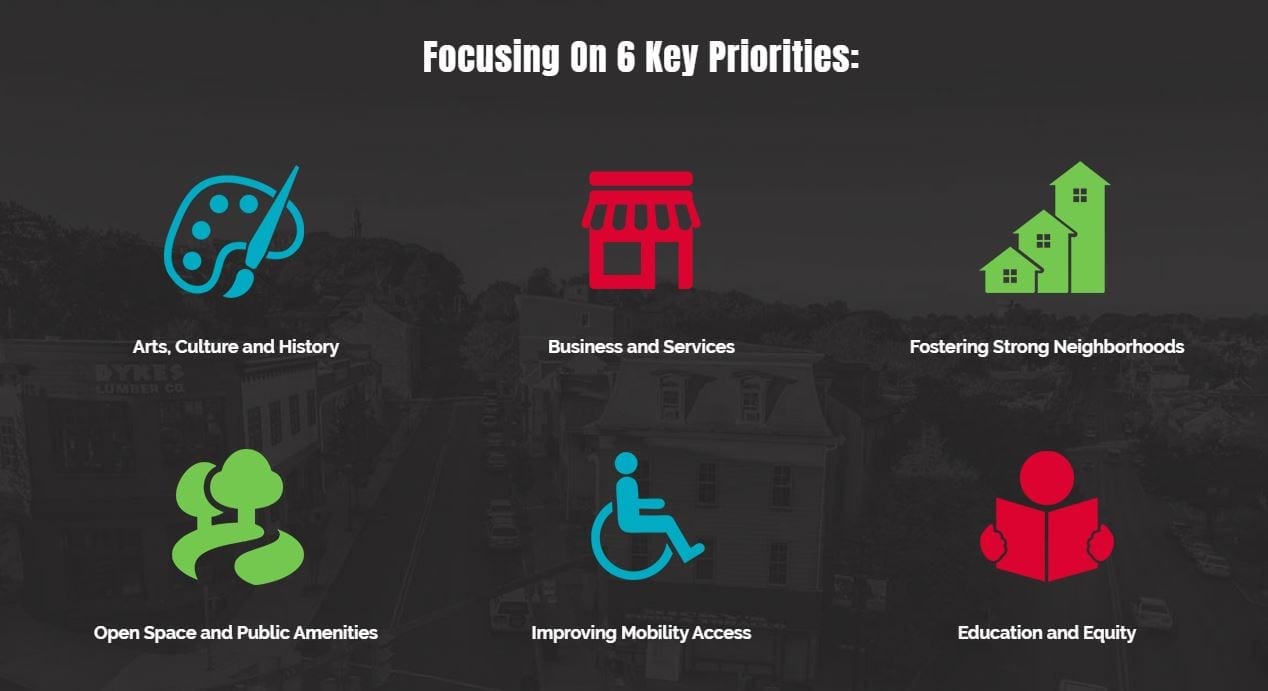 The final neighborhood plan reflected priorities in six areas, as shown above. It highlights different sections of the neighborhood, their assets, and what they might be suited to in the future, as well as “how to protect the flavor of the neighborhood moving forward,” Amy explains. Rather than a plan that will be entirely implemented by the City, GEDP, or any one entity, the plan states that it “includes projects and initiatives that are intended to be adopted and implemented by a range of agencies and community partners.” A benefit of creating one overarching plan is that it organizes those wide ranging stakeholders who may not be coordinating with one another on a daily basis around common goals. Suggestions in the plan include additional street trees, leveraging the riverfront by reintroducing a pedestrian bridge over the Lehigh River, recruiting a local urban grocer, building on Paxinosa’s role as a community resource and site for neighborhood activities, and more.

Other recommendations made in the plan are already in action. “Our steering committee got up and running right away,” says Amy, explaining how she has worked with community partners on a variety of projects. The Park Leader program, a partnership with the Easton Branch of Greater Valley YMCA, recently started for this summer with slight modifications due to COVID-19, and offers sports, crafts, team-building, and lunch to elementary school-aged children at Dutchtown and Vanderveer parks for free. This year, the YMCA staff who run the program are particularly focused on checking in socially and emotionally with kids who may be experiencing a lot of stress or rapid changes in their lives as a result of the pandemic, says Lori Metz, branch director for the YMCA. She also emphasizes how these types of programs build community. “Sometimes people only know you within your four walls,” she says, “but through the Park Leader program we met a lot of great people who wanted to be part of what we were doing.” Last summer, the Y was able to connect kids who hadn’t participated in their programming before to their all-day summer camp program, helping them to navigate financial assistance when needed. Lori also met a grandmother of one of the Park Leader program children who wanted to support the program however she could, and brought cold drinking water to the group during the day. 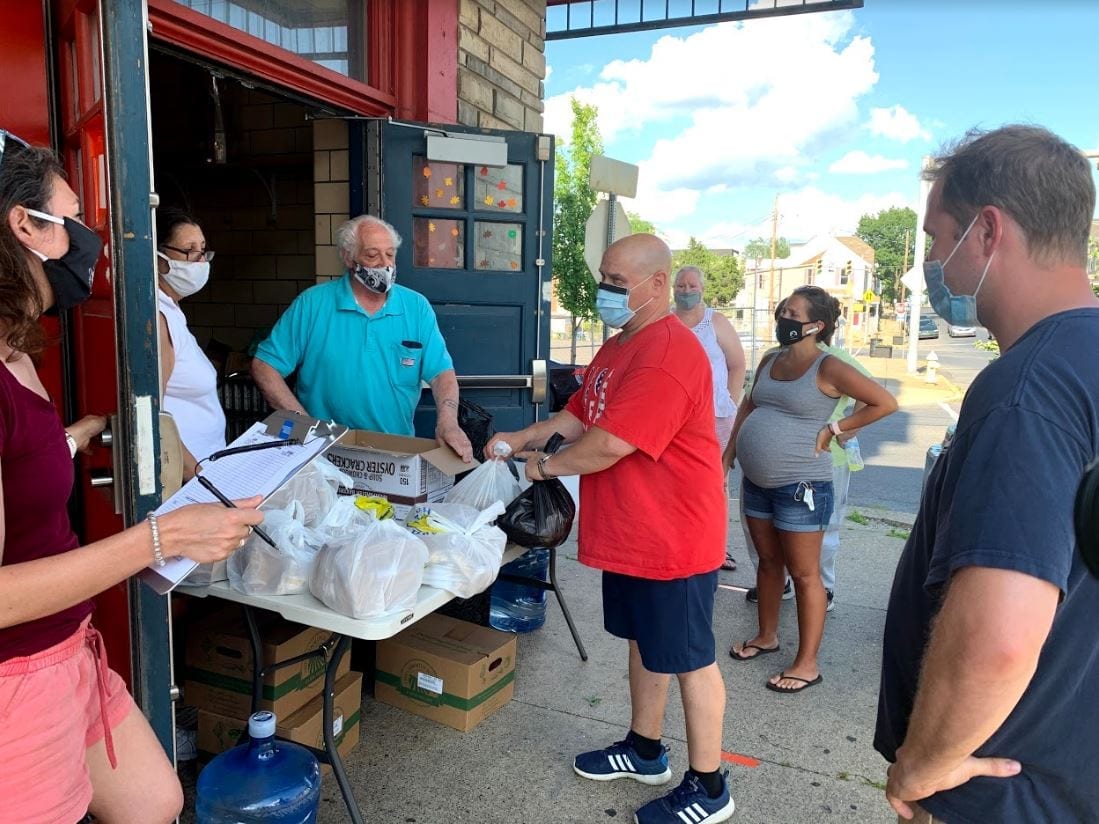 COVID-19 has driven home the importance of that type of support within neighborhoods and coming together as a community during a time of stress or crisis. Lori describes how the West Ward Community Initiative and GEDP, Easton Area Community Center, local West Ward restaurants, and YMCA all played distinct roles in distributing meals for several weeks. “We all have similar missions but different things we’re good at,” she says, “it’s nice to put our resources and skills together to create a stronger base.” The Easton Branch YMCA has a large kitchen and experience feeding children at their location on a regular basis, so they were able to prepare a large number of meals at their facility. Amy and the GEDP have strong relationships with restaurants and businesses in the West Ward, so they could purchase dinner meals locally and quickly garner support in that network. Finally, the Easton Area Community Center knows the residents best and was able to provide a familiar face while distributing meals, building trust and getting the word out about the program. Other partners were able to offer support throughout the process too, with churches sending parishoners to help pack meals or bring donations, and the Tucker Silk Mill collecting donations from their customers, for example. While collaboration like this can be difficult to coordinate, it is valuable to pursue as it often results in more widespread benefits than any one group working alone could achieve. 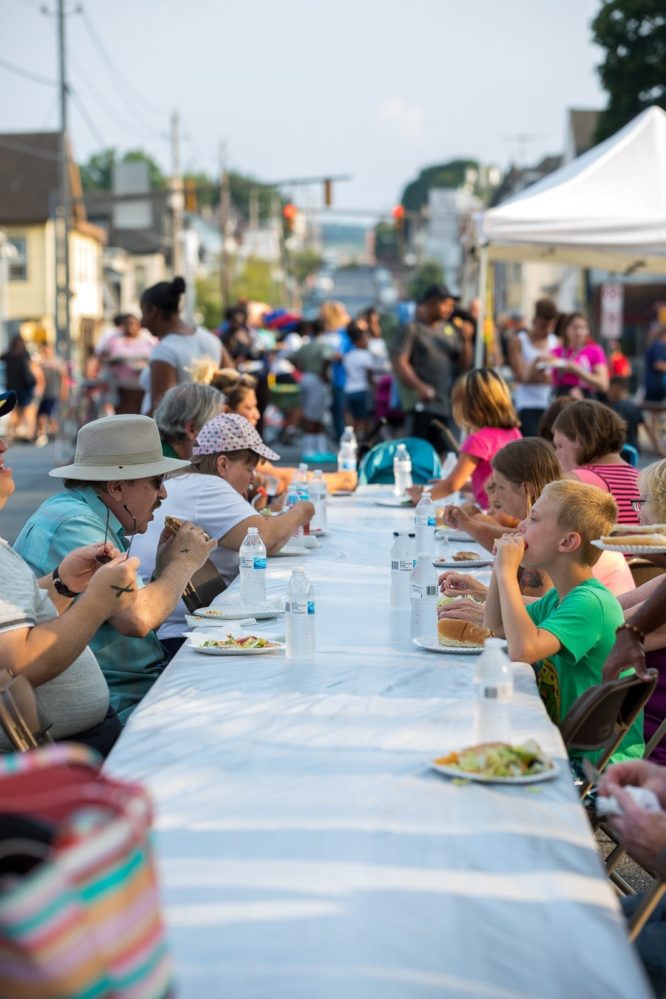 Partnerships and community members’ drive to positively affect their neighborhood have resulted in a variety of programs in the short period of time the West Ward Community Initiative has existed. This year, they organized a Neighborhood Cleanup Day at the end of April, and although people couldn’t congregate together to participate, many individuals and families went out to clean up their block. “It was great to see how many people came out to do something for their community,” says Amy. Amy’s favorite WWCI program so far was a block party for over 500 people on North 12th Street and inside Cottingham Stadium for National Night Out last year. “It really brought together partners who hadn’t worked together before,” including the Easton Branch of Greater Valley YMCA, Paxinosa, and the police and fire departments, she explains. Other initiatives are similarly focused on building relationships throughout the community, including a monthly newsletter distributed throughout the West Ward; partnership with the Easton Ambassadors team for hospitality, safety, cleaning, and outreach; and additional programming and meal distribution by the YMCA and Kellyn Foundation at the Vegetables in the Community stand run by Lafayette College. 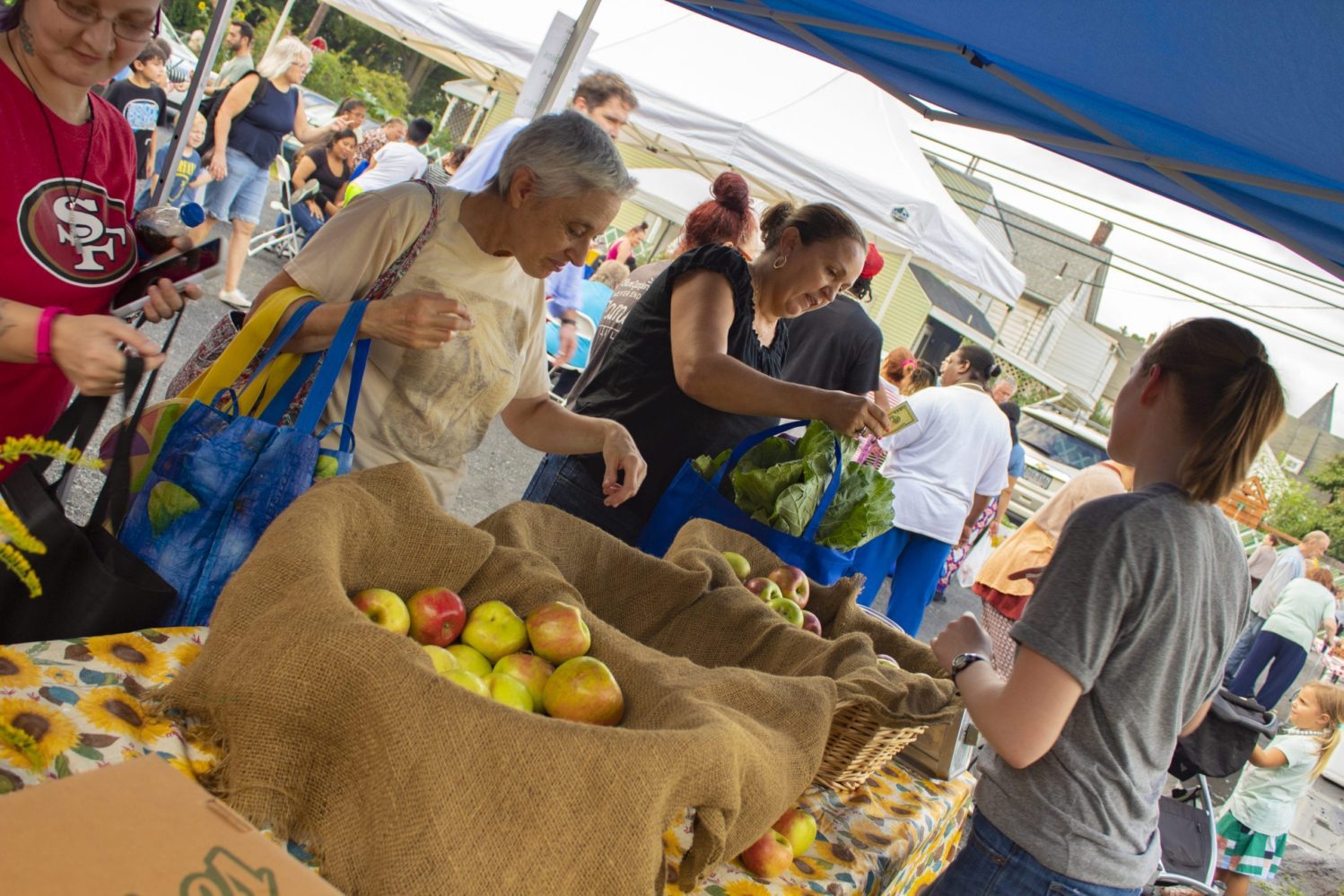 As the energy and networks behind these efforts continue to grow, next steps will focus on the need for improved parks and green spaces and highlighting the community assets that residents identified during the neighborhood planning process, says Amy. Lafayette College has partnered on a multi-year project to map the neighborhood as a whole – housing, commercial spaces, parking availability, parks, and more – to be able to easily direct people to existing amenities and think about future needs. “If a business owner approaches us and says ‘I want to open a cafe,’ the map will help steer them to a potential available space,” Amy says. One site that will likely receive needed investments is Vanderveer Park. Since the park is located directly behind Cottingham Stadium, the stadium rebuild presents the perfect opportunity to look into making improvements. Residents also expressed interest in a Facade Grant program to provide information and financial support for home improvements. The potential future benefits of community partnerships and the West Ward’s neighborhood plan continue to grow as more people get involved and are connected to opportunities to make a difference.

“Lots of what you can improve or help change happens right here on the local level,” Amy emphasizes, “it’s not hard to get involved – even just showing up at the vegetable stand on Thursdays, going to play in the park, knowing what’s going on in the city and sharing information with a neighbor, or talking to people from your porch. We will have ways to volunteer soon too. There are so many ways – and so many simple ways – to get involved.” That’s what it’s all about. Having a stake in your neighborhood and your neighbors, and doing what you can to make your community the best it can be.