A little known fact about the Lehigh Valley is that it is the site of the highest recorded indoor level of radon in the world (in a home in Center Valley), and often sees dangerously high levels of this naturally occurring radioactive gas. Despite its pervasiveness, many people are not aware that radon is the second leading cause of lung cancer and lack knowledge about actions that they can take to assess and address their own potential risk. Dr. Chrysan Cronin, Professor of Public Health at Muhlenberg College, is working to change that, conducting research in Allentown to determine who is most at risk from radon and how important information can be effectively communicated to those populations. 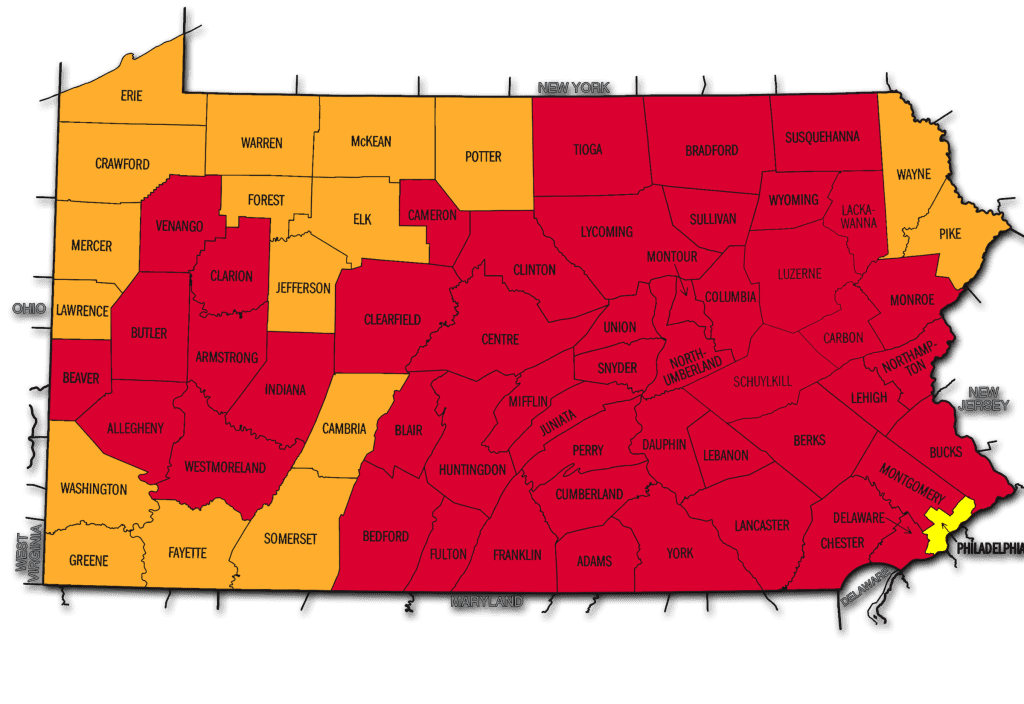 Pennsylvania has some of the highest radon levels in the country. The red counties have the highest predicted average indoor radon levels exceeding the recommended maximum amount. Image: radonlehighvalley.org

Dr. Cronin wasn’t fully aware of the risks of radon herself until moving to the region in 1990 and buying a house, when radon was mentioned in the contract. “I had heard [of radon], but I didn’t understand that we were moving into an area that was so overburdened with radon,” she says. Later, as a graduate student in public health, she decided to study radon for her dissertation. When deciding what aspect she wanted to focus on, Dr. Cronin looked at state data on radon in Allentown to assess the level of risk present there. What caught her attention, however, were the large discrepancies between the percentage of residences tested for radon in Allentown’s five zip codes. Interested in figuring out what factors might have been contributing to people in certain regions of the city being less likely to test the radon levels in their homes than others, Dr. Cronin analyzed a range of known social determinants of health, including race, ethnicity, gender, age, income, home ownership status, and education. She found that the zip codes with lower rates of testing also had higher percentages of renters, lower average education levels, lower median incomes, and higher proportions of Hispanic residents. People regardless of education, income, or ethnicity want to be healthy and keep their families healthy, so Dr. Cronin set out to learn what barriers were stopping people in these communities from taking available steps like testing to deal with the risks of radon. 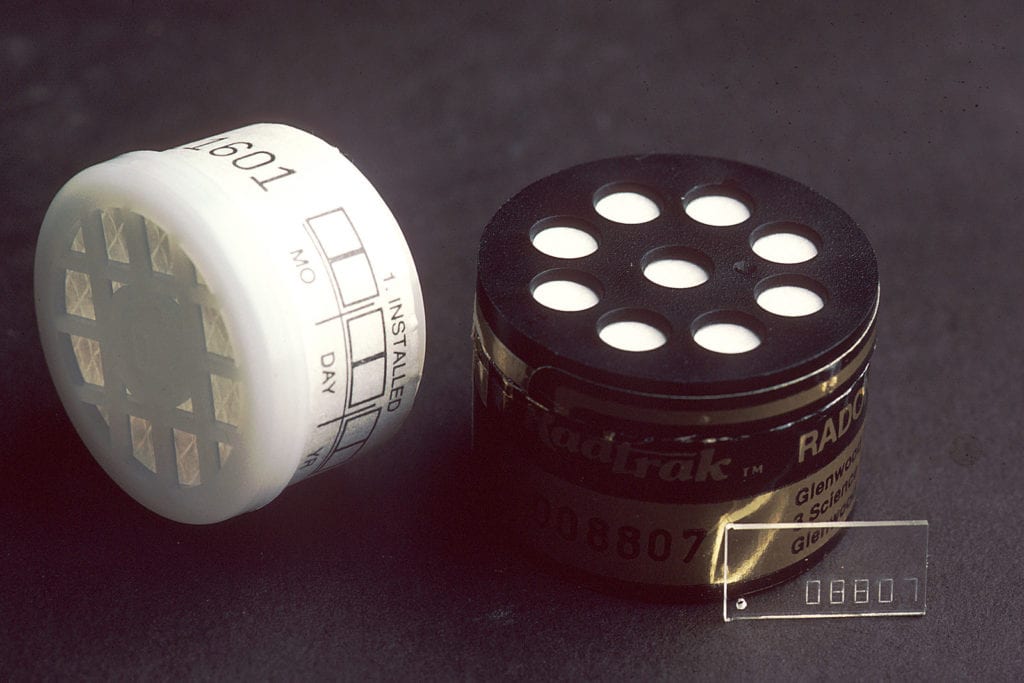 To answer this question, she worked with student research assistants to interview over 550 people in Allentown in both English and Spanish to survey their needs regarding radon. They asked residents whether they had heard of radon before, if they knew that Allentown typically has high radon levels, if they tested their home, and demographic and other questions. This survey provided quantitative support for what might in hindsight seem like common sense – there were no informational materials about radon available in Spanish across the state, and so Spanish-speaking populations were less aware of radon risks. When other potential contributing factors were controlled for, ethnicity was “an independent predictor of radon awareness and knowledge” (See an academic journal article about the study here). 39% of Hispanics said they had heard of radon before, compared to 84% of non-Hispanics, and just 13% knew they lived in an area with typically high radon levels compared to 49% of non-Hispanics. While conducting the survey, if respondents said they weren’t aware of radon, Dr. Cronin and her team explained the potential danger it poses and what people can do about it. “We would take some time with these people, and they were grateful” she says, “many of them thanked us. Some of them were also very alarmed and concerned that this was an issue and they had never heard of it.”

Dr. Cronin describes thinking that “we found this, now how do we try to solve this problem.” This focus on applying academic findings emerges from her training in public health, which she explains teaches people “how to do the research, but then to push past that and do something consequential with it.” Dr. Cronin and her students wanted to provide the multilingual information on radon that their survey had found was lacking. To determine the best way to do this, they expanded their research through focus groups (three with English speakers and three with Spanish speakers) to learn where residents get their information and what messages about radon would be most effective. Then, the research team turned their attention to creating resources in English and Spanish using the communication strategies that were most effective in their focus groups.

Signs like these were placed in LANTA buses to inform riders about radon and direct them to the radonlehighvalley.org website for more information. Photo provided by Dr. Chrysan Cronin.

In the past year, Dr. Cronin and her research students have started a communication campaign for information on radon throughout the city of Allentown and beyond. First, they worked with the Pennsylvania Department of Environmental Protection (DEP)’s Radon Division to translate their informational materials into Spanish. Dr. Cronin and her students also designed a website – radonlehighvalley.org – with information specific to the region in both Spanish and English. The website has seen a lot of traffic, perhaps reflective of the fact that focus groups revealed that Spanish speakers get information from their family, church, and online sources more than TV or newspapers. “It does make sense,” Dr. Cronin says, “WFMZ does the news in Spanish, but there are no Spanish newspapers in the Lehigh Valley that I’m aware of. If you can’t read the language, why would you read The Morning Call?” Another way of getting the information in front of people was placing signs in Spanish and English on LANTA buses and in Allentown bus shelters.

Importantly, once people know about radon and the importance of testing, they have to understand how to use the test. “When we were working on translating the website and the brochure,” Dr. Cronin explained, “we called the radon testing kit manufacturers and said ‘do you have these in Spanish?’ and they said ‘no we have them in French.’ We recommended that they start making them in Spanish, and in the past 12 months they have come out with the test kit instructions in Spanish, for the kits you buy at the hardware store.” Dr. Cronin is still waiting on state data for the last year to assess whether the communication campaign increased radon testing rates in areas of Allentown with large Hispanic populations, but they have certainly created a range of new opportunities for people to access information and make a more informed decision.

If this is your first time learning about radon, or if you’re wondering whether it’s worth it to test your home, Dr. Cronin emphasizes the following three key messages: 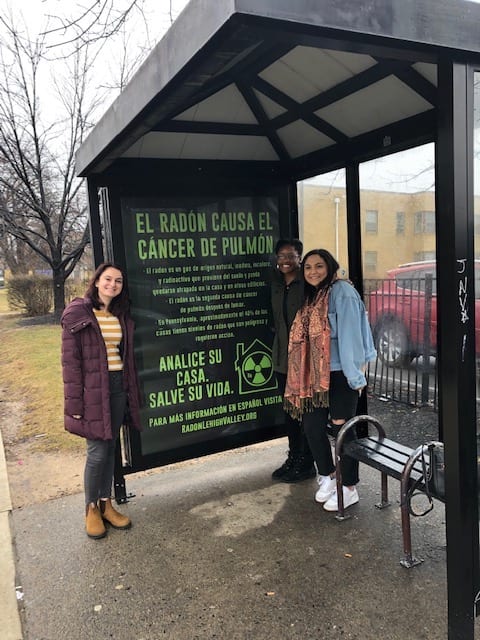 Some of Dr. Cronin’s student research assistants stand by an informational sign in Spanish in a bus shelter. Photo provided by Dr. Chrysan Cronin.

Dr. Cronin and her team were able to create their communication campaign sharing these messages due to partnerships with a variety of entities and student and faculty researchers’ commitment to putting their research into action. The PA DEP helped to fund the effort, and a donation from the Harry C. Trexler Trust allowed the team to compensate people for taking the initial survey and participating in the focus groups. The project also required support in terms of human hours – “I guess I could have done 550 interviews by myself,” says Dr. Cronin, “but it was a lot easier to have students, who were research assistants, help me. So we couldn’t have done it without those resources either.”

During the survey, in addition to the issue of a lack of awareness and access to information, people brought up issues of the limited ability of renters to do anything about radon in their homes themselves, or to ensure that their landlord addresses it. Dr. Cronin explains that in Pennsylvania, there are no laws that require landlords, employers, schools, day cares, or any other establishments to test for radon, “so renters are pretty powerless.” “That’s the policy side of what I work on,” she says. Other states require landlords to test for radon and disclose results to renters, and Dr. Cronin sees laws like those as important for the safety of the 52% of people she interviewed in Allentown who rent their homes. She has worked with state legislators and shared her research, hoping her work can help inform future policy.

At NNC, radon is one of the hazards addressed in our CREATE Resilience project, and emerged as a priority hazard in some of the community feedback we gathered, further demonstrating that there is a strong need for better communication and education about how people can keep themselves and their families safe from radon. This is true in communities outside the Lehigh Valley as well, and Dr. Cronin’s work has the potential to serve as a model for other places. People in Hazleton, PA have recently heard about this project through the PA DEP and news coverage, and reached out to ask for more information to plan a similar effort there. The Muhlenberg research team’s next steps include exploring additional avenues for raising awareness about radon, particularly working with pediatricians and family practice doctors to encourage them to discuss radon with their patients. They have interviewed 40 Lehigh Valley doctors and found that only one already brings up radon during appointments, and some don’t even know what radon is themselves. If the last year is any indication, Dr. Cronin and her team of research students are just the people to use this as an opportunity to get important information about radon to the community members who need it most.

Dr. Chrysan Cronin recently gave a presentation on her research for the Johns Hopkins Bloomberg School of Public Health, which can be viewed here: https://www.jhsph.edu/alumni/attend-an-event/spotlight-series/spotlight-series-with-Chrysan-Cronin. 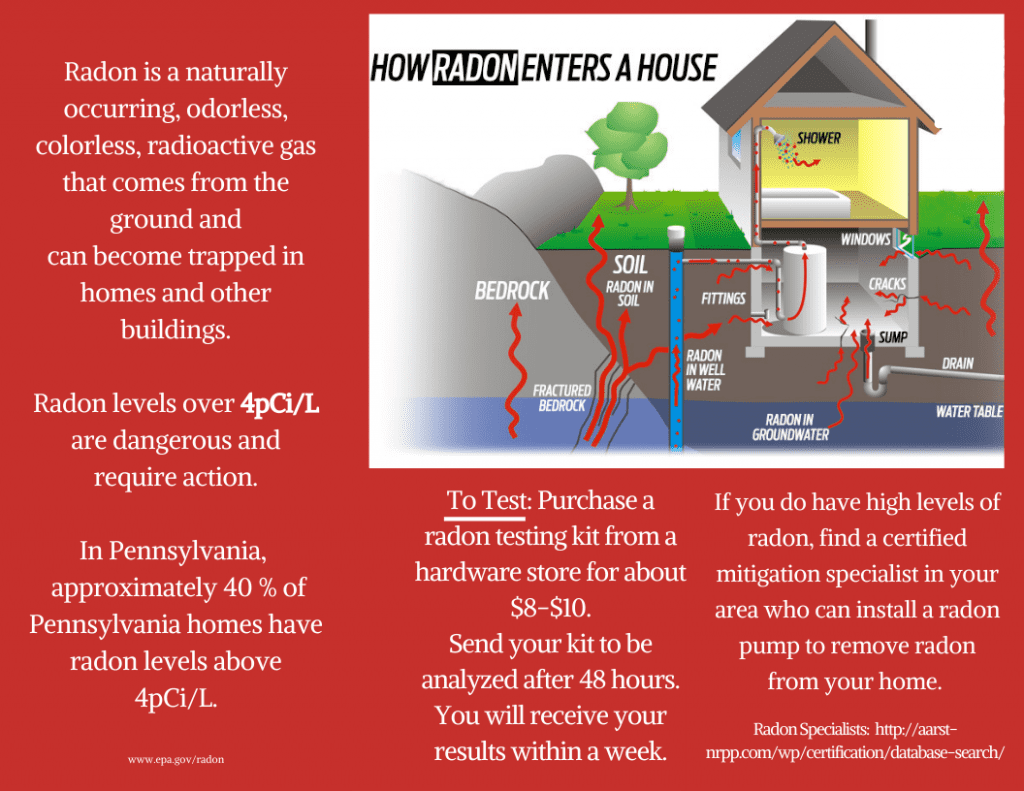 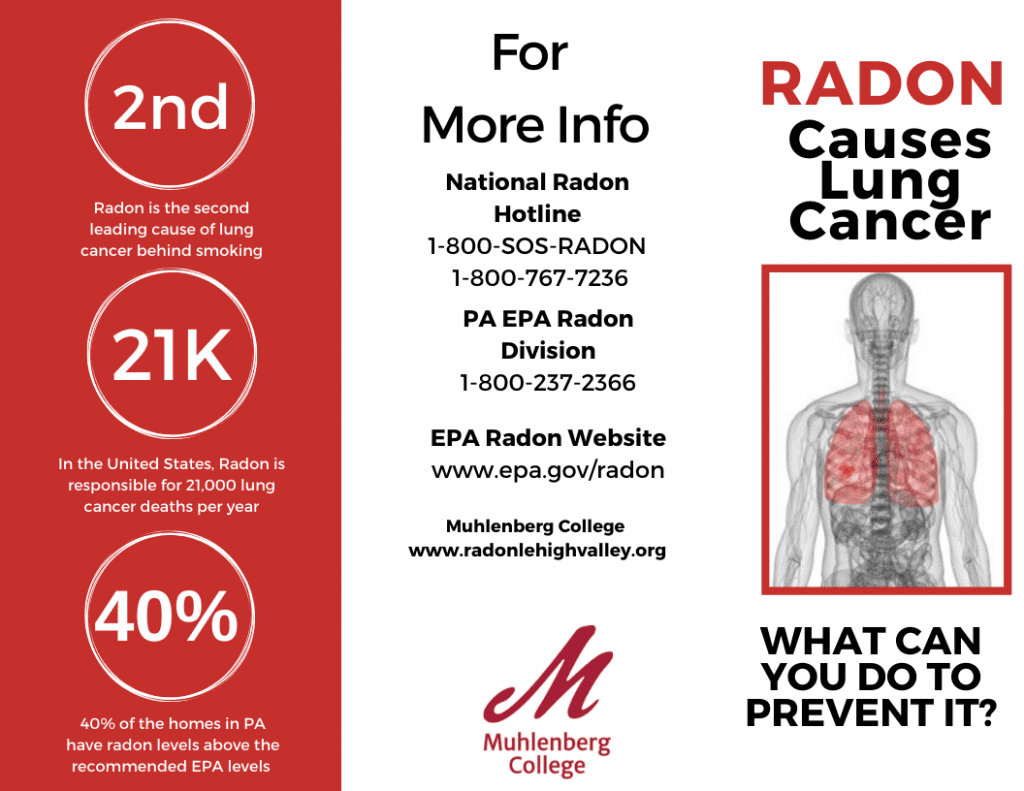 Find a downloadable version of this brochure at: http://radonlehighvalley.org/radon-brochure/