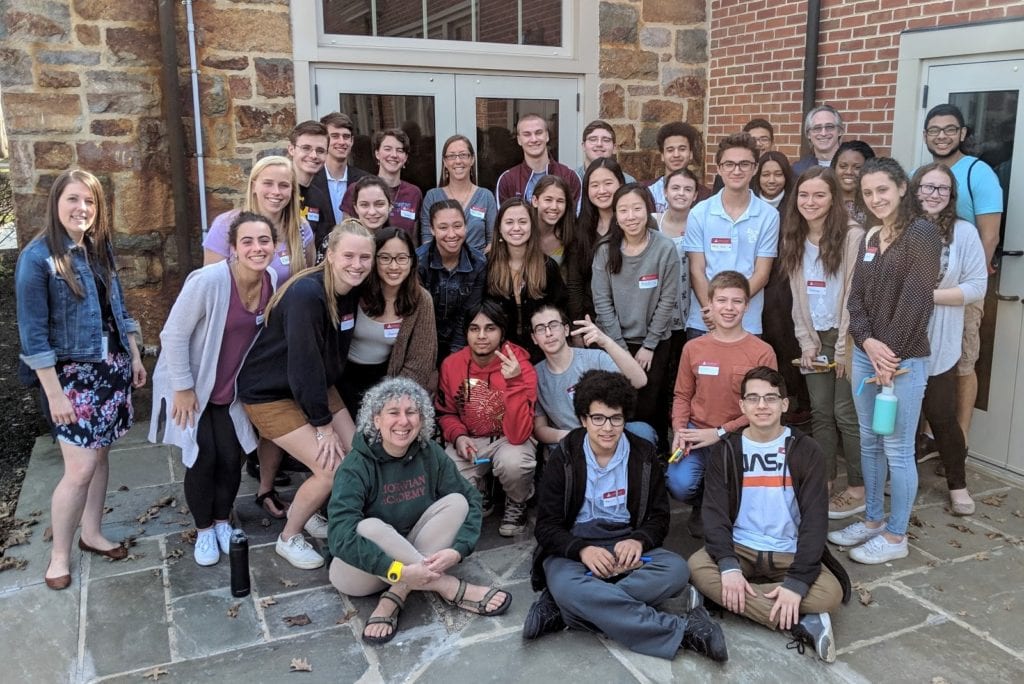 Biology teacher Greg Zahm describes his Sustainability Project at Liberty High School in Bethlehem as a “solution to two needs.” First, a need for education in sustainability, and second, students’ need to perform 60 hours of community service before they graduate. The Sustainability Project provides students with opportunities to learn about humanity’s effect on the environment and to reduce the school’s footprint, earning community service hours after school. Greg notes that while finding a way to complete their graduation requirement is often a strong initial motivation to get involved, “there are also those kids who keep coming after they’ve gotten their hours,” finding the Sustainability Project to be a rewarding way of making a positive contribution to their school community and learning how they can join with peers to address global environmental issues. 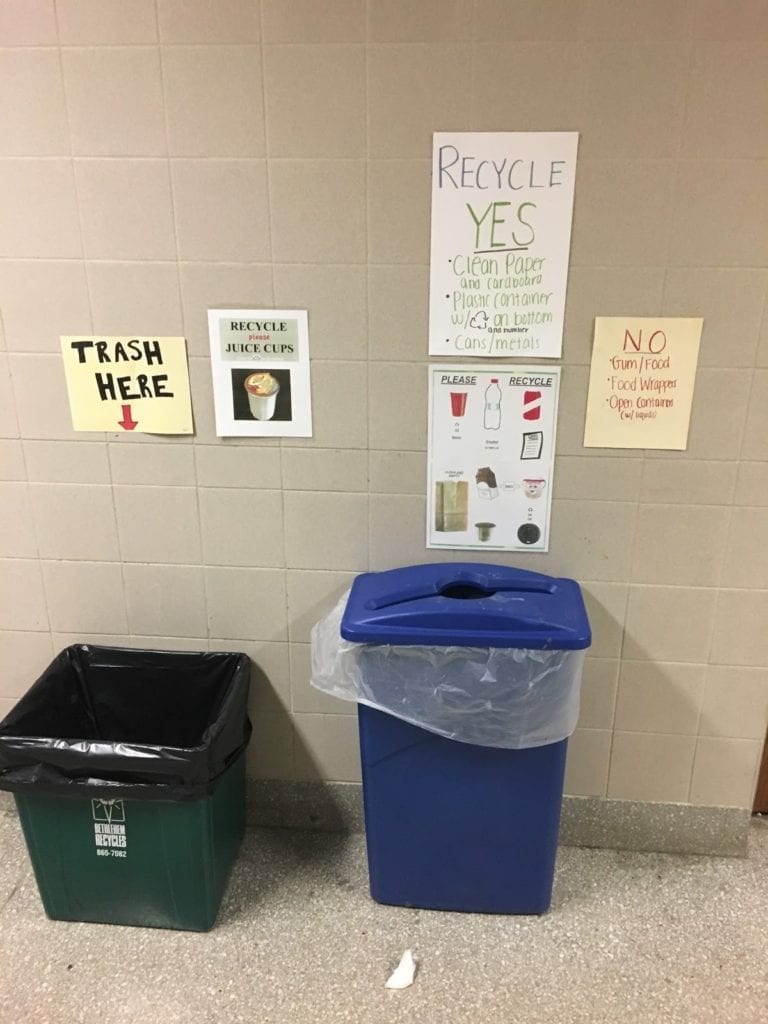 Students in the Sustainability Project created signage to promote proper recycling in the cafeteria.

One approach that students involved in the project take is hands-on involvement with recycling efforts at Liberty. At the beginning of the project, Greg and students noticed that the school had very few locations for recycling. Classrooms were supposed to have both trash and recycling, but common areas often did not, so students started collecting recycling from those areas and preparing it to be picked up by the recycling company. In the five years since the project started, Greg estimates that they collect somewhere between 6,000-9,000 gallons of recycling each year. “It can be a lot of work and be a bit of a dirty job,” Greg says, “but a lot of students like to have something physical to do.” The other half of the Sustainability Project involves an educational campaign. “We talk, read, watch videos and discuss them, and also look for ways in the school we think we can make an impact,” Greg says. Students work to reach out to other students and staff in a variety of ways, putting up banners with information on sustainability and locations for recycling and creating social media campaigns. They also engage directly with others at Liberty, for example, the cafeteria staff. “The cafeteria has been one of our focus points because they serve about 400,000 meals per year – think of everything that entails that could be recycled,” Greg points out. By talking with staff, students in the Sustainability Project learned that the cafeteria was using styrofoam trays despite having a working commercial dishwasher because they had been having issues with needing to replace too many of the reusable plastic trays. Students took on monitoring the trays and the cafeteria agreed to switch back to the reusable option, which custodians estimated cut 30-40% of their daily trash. 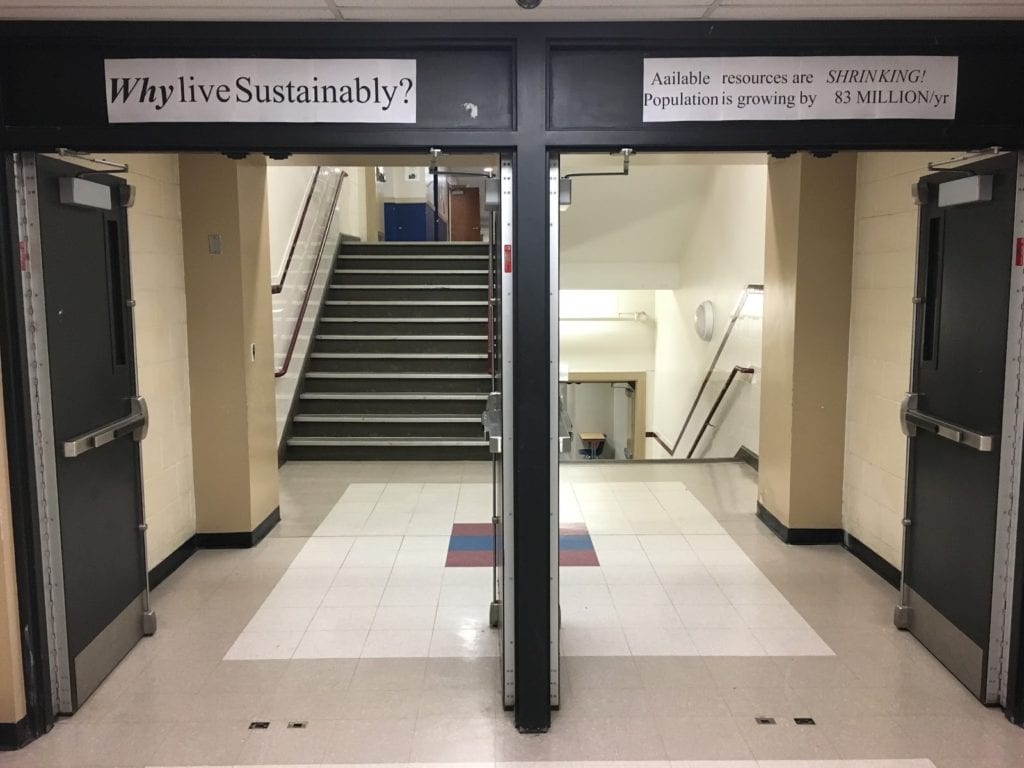 Students put up posters around school to encourage other students and staff to think about sustainability.

Moving forward, Greg is exploring new ideas for the Sustainability Project to work on. To expand their influence, he’d like to distribute a sustainability pledge to all students and grow participation among staff, as well as reach out to other schools, especially at the elementary and middle school levels.

Greg has been providing input to the Bethlehem Climate Action Plan as a member of the stakeholder working group, sharing ways that sustainability education might contribute to broader efforts to reduce greenhouse gas emissions and adapt to climate impacts. Improving sustainability education aligns with a pledge the Bethlehem Area School District made in 2014 to “infuse all disciplines with the concept of sustainability,” Greg says. He hopes the Sustainability Project’s efforts contribute to moving toward that goal, to help address “the risks posed to all species, not just humans.”

Teachers have many demands on their time, especially this year, and I asked Greg why, in his view, it’s important to spend his time and effort connecting students to sustainability initiatives. “In one sense that’s an easy question,” he says, “I read a lot, and I have seen the changes around me – I grew up here in Bethlehem. I studied biology and my love has always been the outdoors. So many do not have a connection [to nature] as a young person. There’s so much need, is the short answer.” 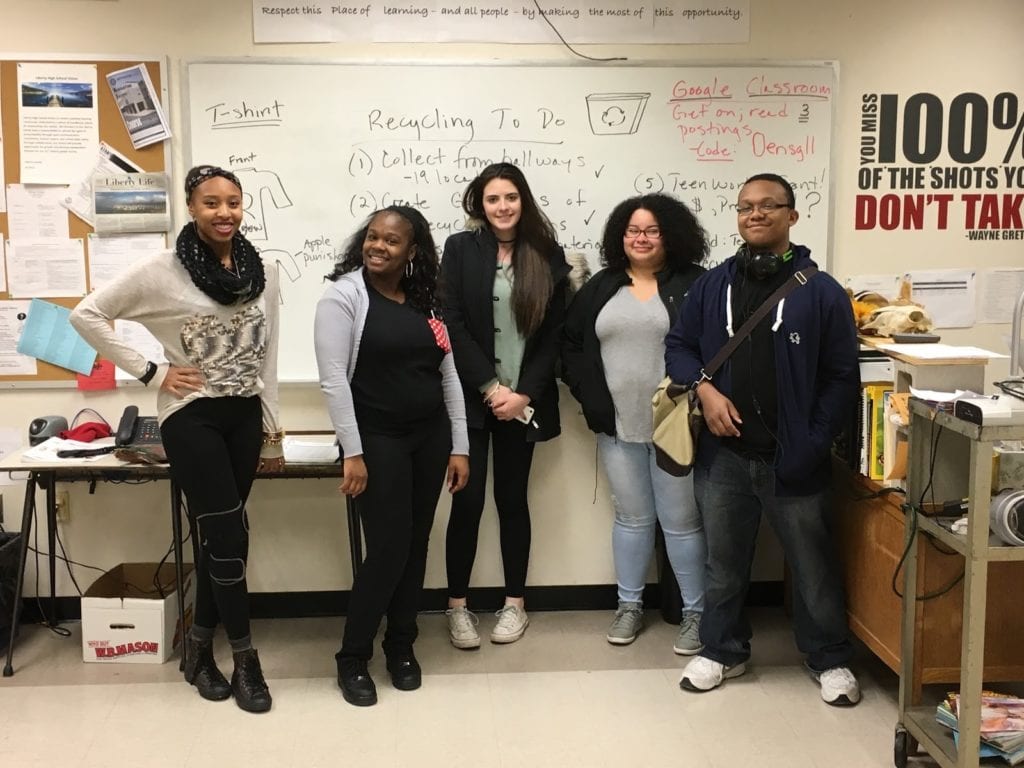 Greg’s motivation to do something in the face of major environmental issues drives him not only to stay after school 3-5 days a week with Sustainability Project students, but also to advise Liberty’s Environmental Club and run an educational and experiential non-profit, GreenS2TE2aM Adventures. He describes the Environmental Club as a highly motivated, largely independent group of students who want to work on real world projects outside of the school setting. Last year, they decided to participate in some clean-up events along the Monocacy Creek, the canal, and the Lehigh River and found that monofilament fishing line was very prevalent. As a result, students researched available options for containers where people could discard the line, raised money and sought out grants, and installed several of the receptacles in Sand Island Park in Bethlehem. “I give them a lot of freedom and am grateful that they take that and actually do something,” Greg says. In addition to the monofilament disposal project, students put together a sustainability fair held at the high school last year where they did educational presentations and activities for younger students and their parents, collected plants and moss to make terraria to sell as a fundraiser, and went hiking as a group. 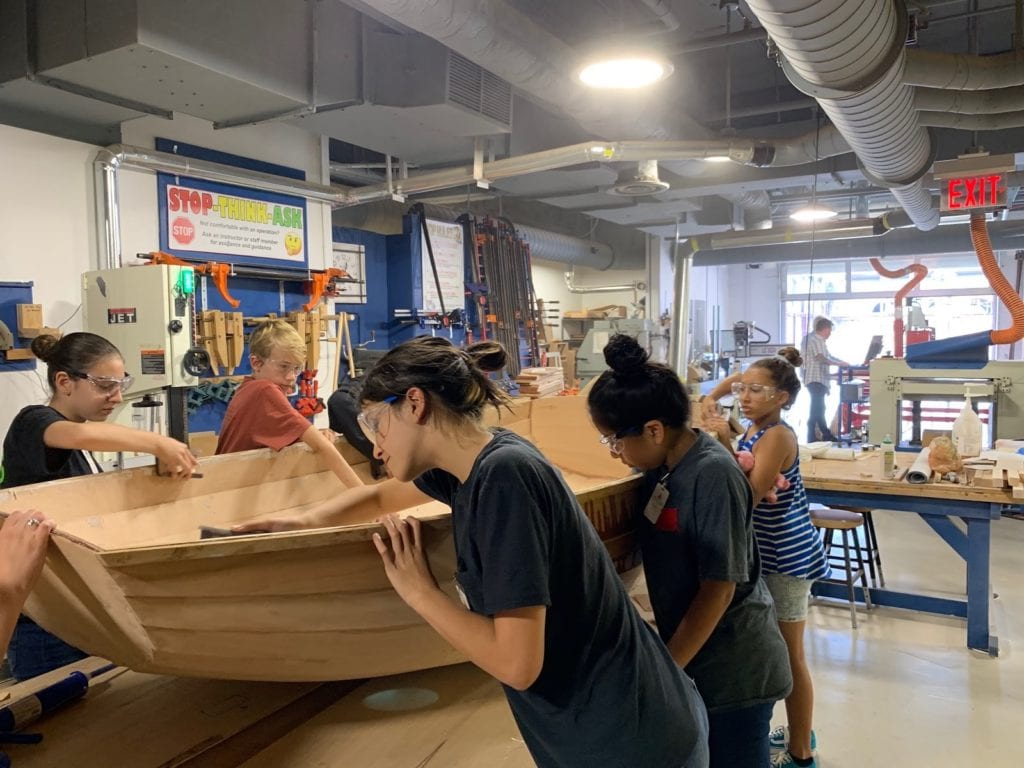 GreenS2TE2aM Adventures has provided opportunities for high school and middle school kids to experience hands-on, travel based adventures infused with sustainability education. For example, they built wooden boats at the FabLab, a site with full metal and woodshop, spray booth, 3D printers, laser cutters at Northampton Community College. After building the boats, Bethlehem middle schoolers sailed them on the Lehigh River as well as with youth in Jamaica. GreenS2TE2aM has also provided opportunities for high schoolers to get learning time at the FabLab on various technology there. “The goal was also to build boats this summer with [the high schoolers], but the project has to be suspended due to the pandemic,” says Greg. 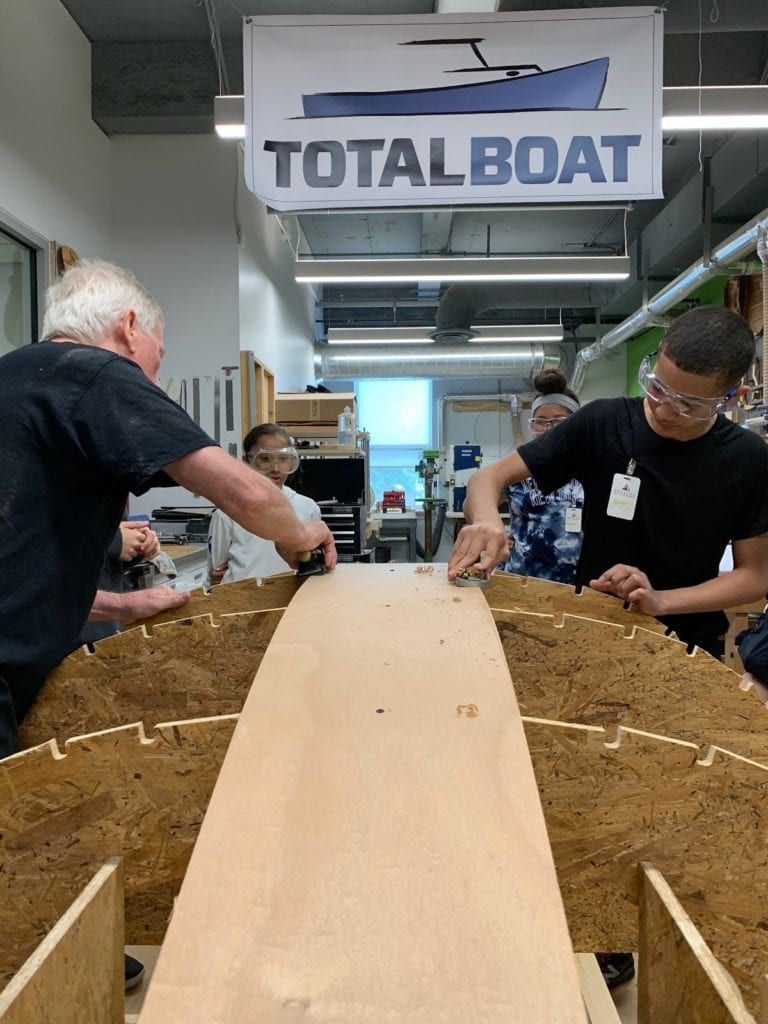 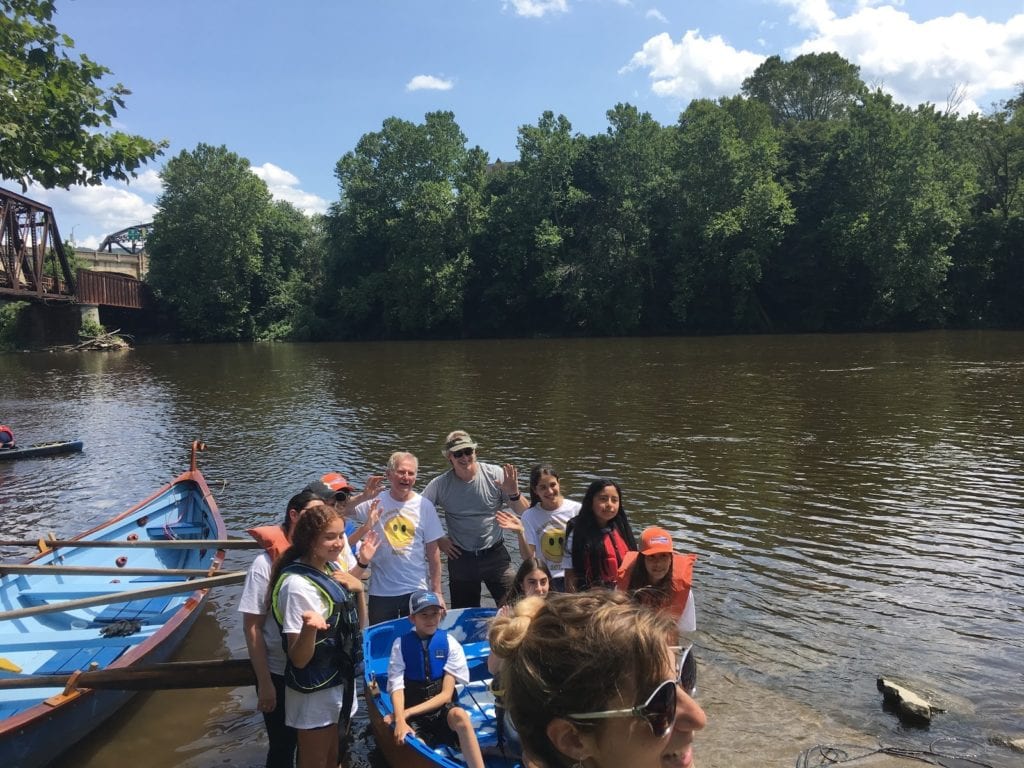 The Sustainability Project and Environmental Club at Liberty High School allow students with various levels of existing knowledge and interest in sustainability to get involved in initiatives that have a visible positive outcome. Having both opportunities to meet with peers who are concerned about making a difference and support for taking action are important factors for anyone, not just high school students, in feeling hopeful and empowered in the face of today’s environmental issues. For students, school is a great starting place because it’s an organization they already belong to where they spend a lot of time. How might the groups you belong to – your workplace, church, community organization, neighborhood block, or other group – create opportunities for their members to join efforts to promote sustainability? These grassroots efforts can snowball, leading participants to make more sustainable decisions in their own lives and demonstrating the need for support for sustainable communities to lawmakers and leaders.