In 2017, Minsi Lake was drained for repairs to its dam and spillway, sparking an extensive effort to improve habitat and recreational opportunities in this special place. Draining the lake “was kind of a once in a lifetime opportunity” to undertake these projects, says Jim Wilson, Recreation Specialist for Northampton County Parks and Recreation. Since then, many stakeholders and volunteers have been hard at work to take advantage of that opportunity and to do their part to make this natural asset the best it can be. 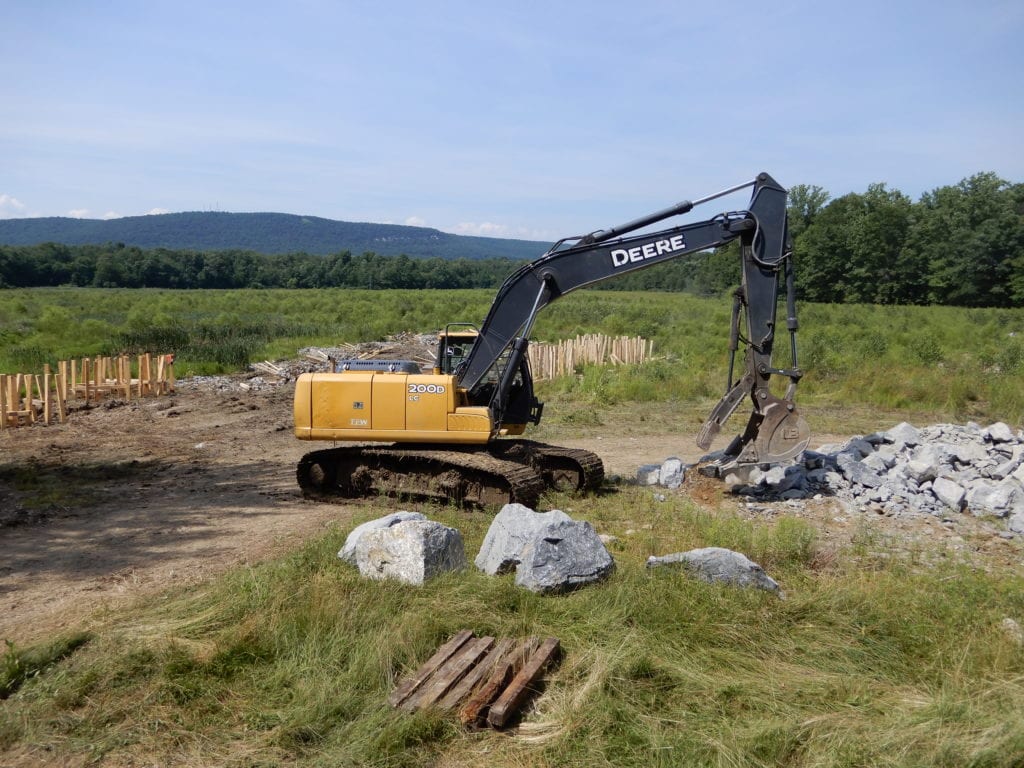 The drained lake provided an opportunity to bring heavy machinery to the lake bed to build fish habitat.

The need to drain the lake three years ago for structural repairs to the dam “was the impetus for the project,” Jim says. Partners came together to take advantage of the empty lake and plan for what they wanted Minsi Lake to look like once it was refilled. Northampton County spearheaded this effort by signing on to the Pennsylvania Fish and Boat Commission (PFBC)’s Cooperative Habitat Improvement Program. Under this program, local organizations raise funds for the necessary materials for habitat improvement projects and then PFBC plans and carries out the technical work. The County and nearly a dozen other partners including Upper Mount Bethel Township, Wildlands Conservancy, Martins Jacoby Watershed Association, Slate Belt Rising, Senator Mario Scavello’s office, Representative Joe Emerick’s office, Northampton Sportsman Club, Lehigh Valley Center for Independent Living, and Northampton County Junior Conservation School created the Friends of Minsi Lake group and started working with volunteers to raise funds and conduct public outreach regarding the importance of the project. People’s passion for the lake led to impressive success in these efforts. “The Minsi Lake project was one of the three largest lake habitat projects ever conducted by PFBC, and that was because Friends of Minsi Lake did such a great job raising funds,” Jim says. 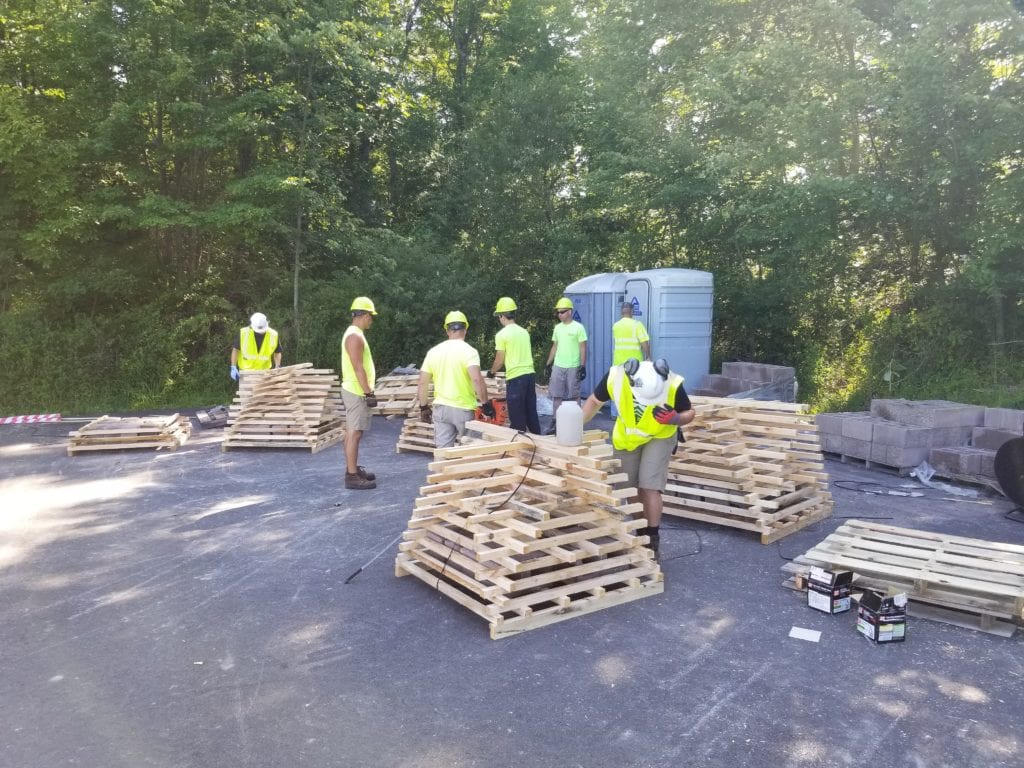 The main goal of this habitat rehabilitation portion of the project was to increase woody and rocky structures on the bed of the lake that fish and other animals use for shelter and sources of food (as algae or other vegetation grows on the structures). Northampton County and its partners under the Cooperative Habitat Improvement Program raised over $140,000 from local organizations and individuals to buy the materials PFBC used to accomplish the project goals. These materials were purchased locally to support the Lehigh Valley economy, demonstrating how a project that originates with goals of environmental protection can contribute to economic and human well being as well. 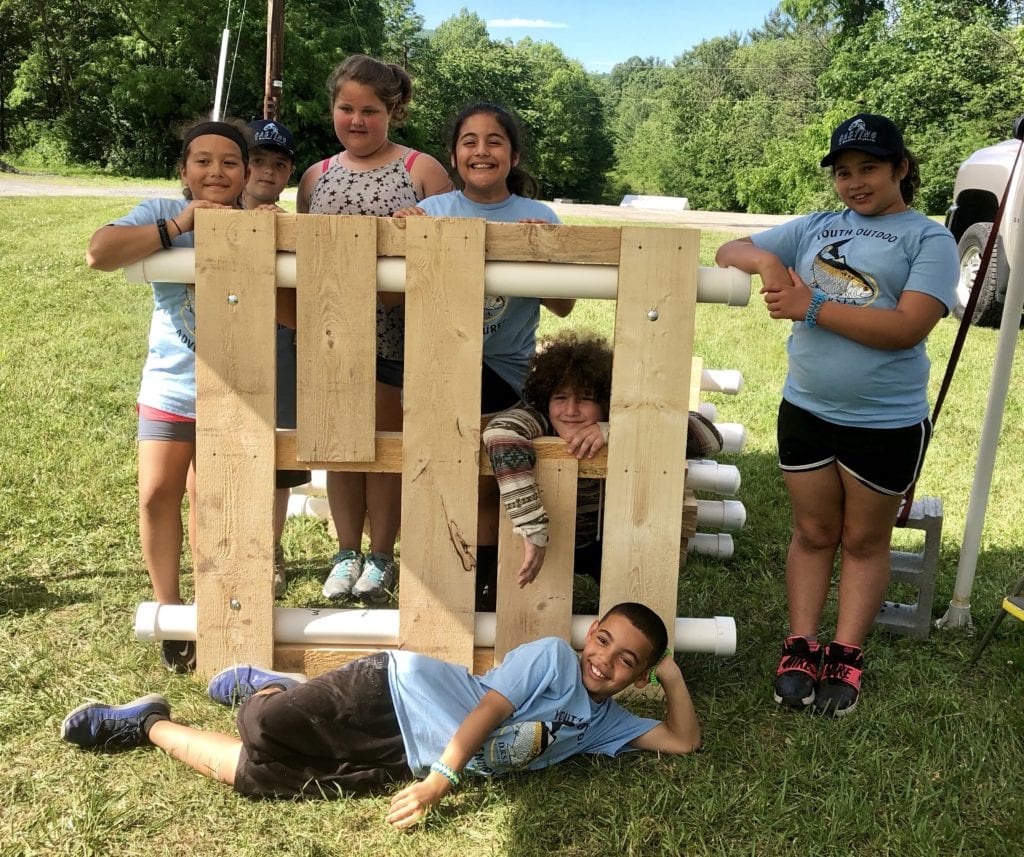 PFBC surveyed the lake, finding that 75% of the lakebed needed additional habitat for fish. PFBC then developed a plan to build 640 large habitat structures to be placed in the lake while it was empty and to have volunteers build 210 smaller structures to be submerged after the lake was refilled in 2020. Over the course of 3 weeks in July 2019, PFBC built and installed the large structures, and the smaller structures were then added through this summer. These habitats are already being enjoyed by fish, as the lake was stocked with trout in 2020 for the first time since it was drained. In future years, thousands of fish including largemouth bass, yellow perch, black crappie, pumpkinseed and bluegills will be introduced to the lake. Some of the recently added small habitat structures float on the surface of Lake Minsi, providing basking platforms for turtles – hopefully including red-bellied turtles, a threatened species that has inhabited the lake in the past. 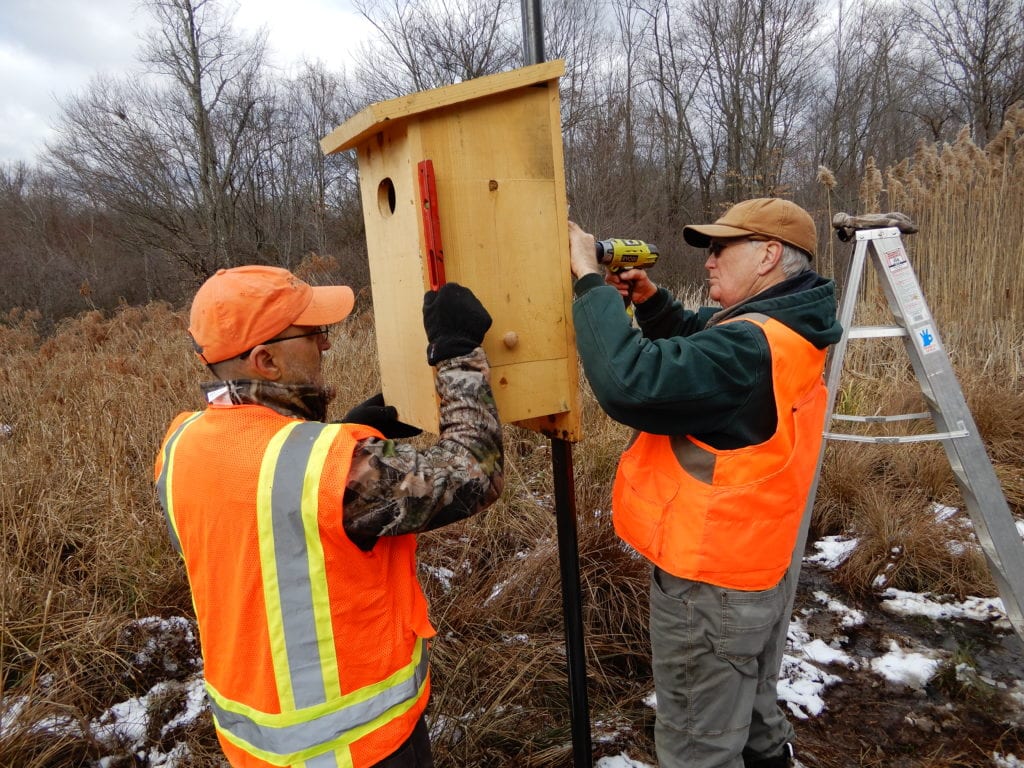 Bird nesting boxes are installed around the lake

Species that live out of the water have been getting some attention too. “Lehigh Valley Audubon really stepped up.” Jim says. “With their assistance, Friends of Minsi Lake and Northampton Parks and Recreation were able to install 53 cavity nesting structures. We want to promote nesting for birds of special concern, like purple martins.” These nesting boxes and platforms will be home to purple martins, wood ducks, barred owls, bluebirds, and ospreys.

The first phase of the project focused on habitat improvement has so far resulted in Minsi Lake winning a 2020 Northeast Environmental Partnership Award from the PA Environmental Council and earning a spot on the National Fish Habitat Partnership’s “Top 10 Waters to Watch in 2020” list. Minsi Lake is one of only two bodies of water on the list that are located east of the Mississippi River. These awards are testament to the project’s success in organizing a wide range of stakeholders and dramatically enhancing the lake for both its inhabitants and its human visitors. 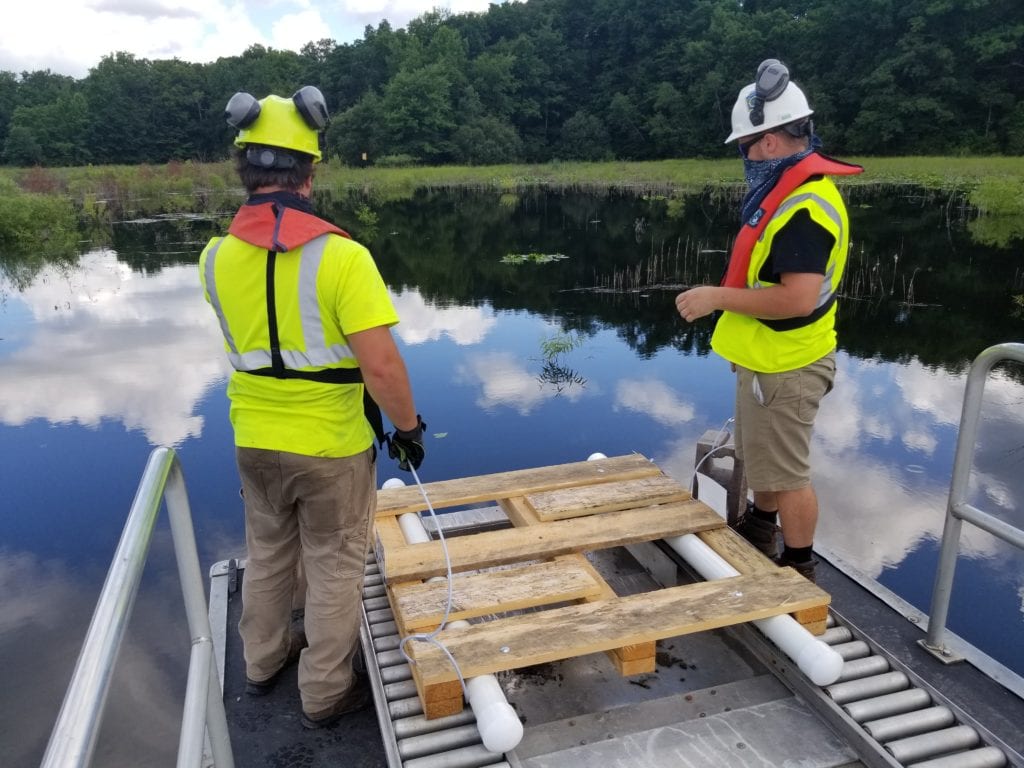 Turtle basking platforms are placed in the lake

As the lake refilled this year, the County’s attention was turning to the next phase of the project, which involves rehabilitating recreation facilities for Minsi Lake and the surrounding Minsi Lake Greenway. “Minsi is one of three public lakes in the Lehigh Valley (the others being East Bangor Dam in Northampton County and Leaser Lake in Lehigh County), so it’s very important. We’re a huge area, with 62 municipalities in the Valley, so it’s important to have a recreation facility like Lake Minsi for residents and visitors alike,” Jim explains. Early improvements for visitor experience at the lake include two Eagle Scout projects that have already been completed. Five nature journaling stations were installed based on NNC’s journaling station design, and interpretive signage was added for the remains of a 1960s fish hatchery along a tributary to the lake. 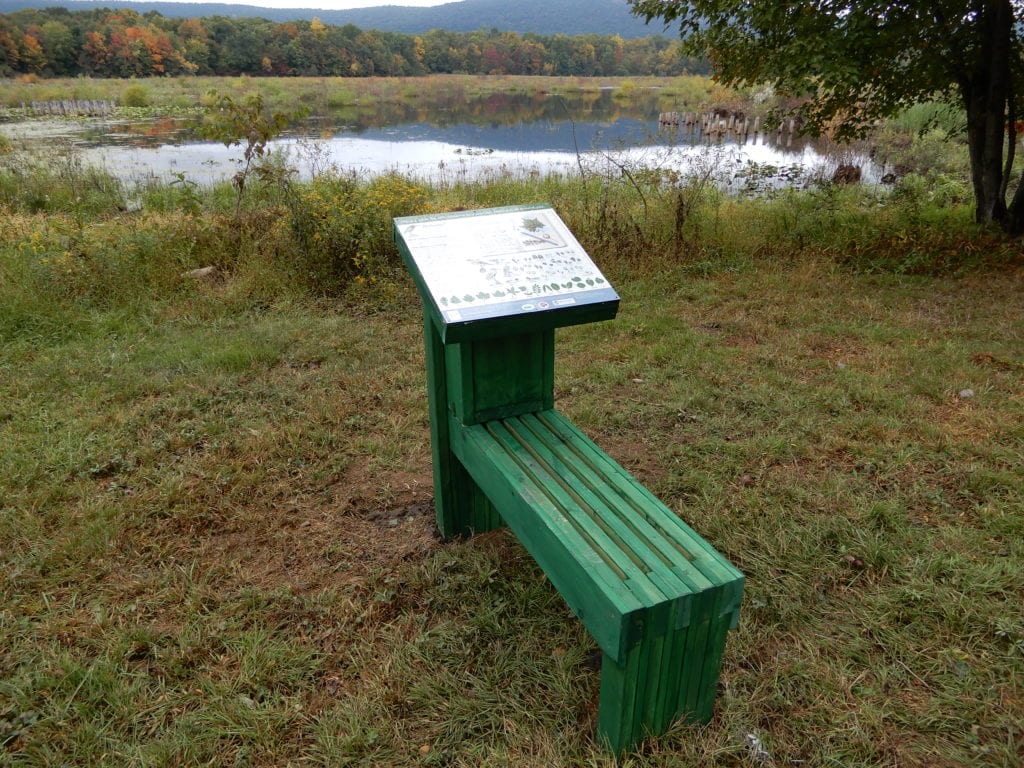 Larger-scale facility projects in this phase of improvements at the lake will enhance recreation opportunities for visitors with physical disabilities. “That’s the big thing is accessibility for all – that’s what we’re aiming for.” Jim says. From the funds they raised, Friends of Minsi Lake has supported the design and engineering of an accessible pedestrian bridge over the lake’s spillway. The County will fund the bridge’s construction, completing a walking loop around the lake. In addition to the pedestrian bridge, other recreational improvements currently in the design stages, include an accessible kayak launch and 2 accessible fishing piers, with installation planned for this spring. Northampton County has committed $500,000 to these projects, which has been matched by grants from the Department of Conservation and Natural Resources and Department of Community and Economic Development

Future project stages will involve improvements to a pavilion, restrooms, and a picnic area and will continue to focus on accessibility. A section of the trail will be made wheelchair-accessible, extending to a new observation deck over the lake. Additionally, lighting in the parking lot for night fishing will be adjusted so that it doesn’t intrude on the night sky, Jim says. The County is also developing a recreation, conservation, and stewardship plan for the entirety of the Minsi Lake Greenway, which includes the 311 acres around the lake in addition to county-owned Bear Swamp Park to the west (251 acres) and Tott’s Gap Conservation Area to the east (550 acres). This area of contiguous woodlands, wetlands, and unique glacial topography is relatively remote and well-protected, meaning that “you see lots of cool wildlife that you don’t necessarily see elsewhere,” says Jim. The Minsi Lake Greenway plan will spell out ways to link all 3 areas with a trail network while ensuring the protection of sensitive environments like the Minsi Lake Vernal Pools, which Jim explains are among “the largest and healthiest expanse of vernal or seasonal pools in the state.” This is important for many species of amphibians, such as the spotted salamander, which wildlife enthusiasts often try to observe as an early sign of spring during the salamanders’ migration to lay eggs in the vernal pools when the weather begins to warm. 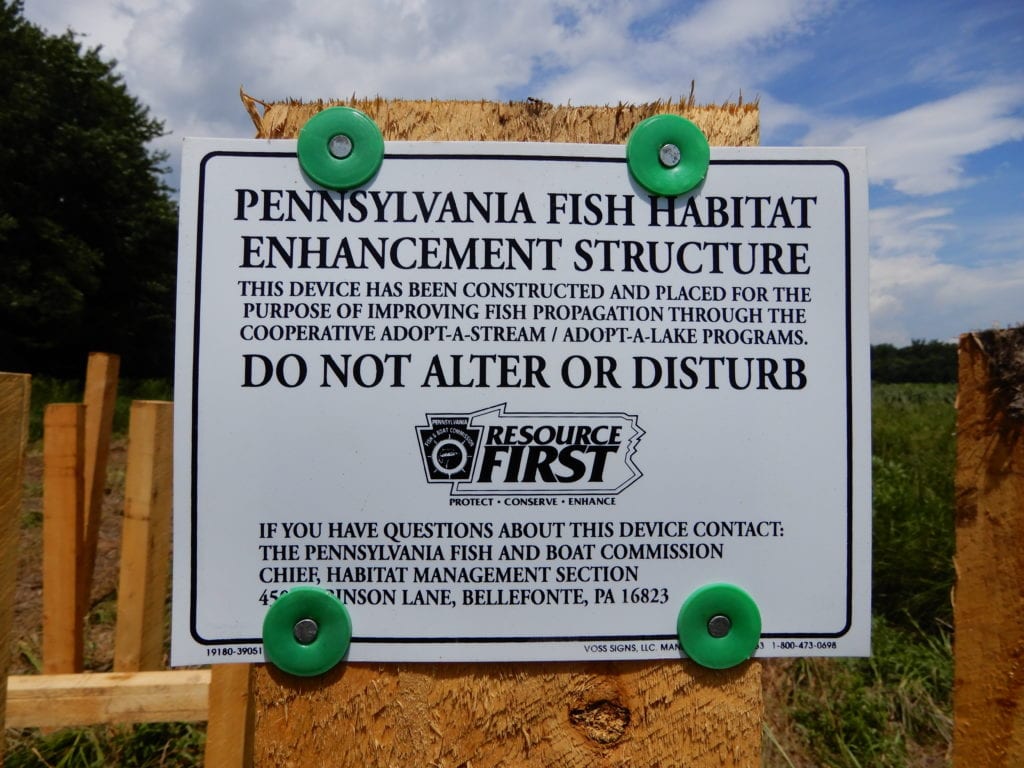 The habitat it provides for wildlife, the opportunity for people to connect to the environment, and the beauty of the landscape are among the reasons Minsi Lake is such a unique and valuable place in the Lehigh Valley, and the ongoing projects there seek to protect and enhance those characteristics. As Northampton County’s first established park, Minsi Lake has been largely unchanged since it was leased from the PA Fish & Boat Commission in 1975, so current efforts are much needed. “It’s absolutely my favorite place in the county park system,” Jim says, reflecting on the rugged landscape, glacial topography, and uncommon wildlife. Listening to him describe the lake, it’s easy to understand why so many people have gotten involved in the Minsi Lake project to take care of this local gem.

All photos courtesy of Jim Wilson.

Videos from the Minsi Lake project