As mentioned in our recent post on eating plant-based, food is a major component of individuals’ environmental footprints. The choices we make while buying food can also be important for our health and for supporting local businesses and farmers. However, the food choices that are available to shoppers can be limited by what grocery stores are willing to provide, usually based on what will make them a profit.

A food co-op is one alternative to this model that uses community ownership of a grocery store to give people control over how their store operates, centering overall community benefit rather than solely economic profit. The Bethlehem Food Co-Op is working on bringing a store like this to Bethlehem, and on Friday March 12 is going to announce the location in the northern downtown area of the city where they will open their community-owned, full-service grocery store. Kathy Fox, a current member of the Co-Op’s board, talked with me about the growth of the Co-Op so far, future plans, and the benefits it will bring for its members and the broader community. 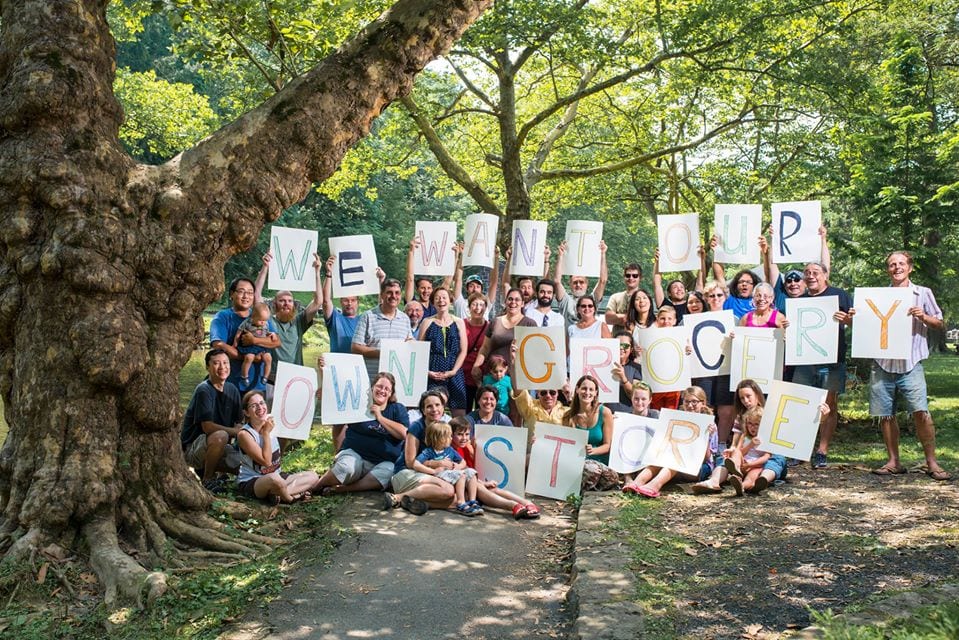 The Bethlehem Food Co-Op, which was first conceived of in 2011 and officially incorporated in 2013, is currently over 770 members strong. Members pay a one-time $300 membership fee, which makes them part owners in the Co-Op and provides the Co-Op with capital funds for their operations. Members get to vote at an annual meeting to shape how the Co-Op functions, can serve on the board, meet and socialize with other members, receive discounts at over 20 local businesses, and will receive special prices on items at the Co-Op store when it opens.

People may join the Co-Op for any combination of these reasons, or for their own personal motivations. New members are welcomed on the group’s Facebook page, where you can read about stories of why they joined ranging from increasing access to fresh local food, to reducing their carbon footprint, to having a grocery store within the downtown area of Bethlehem. Kathy explained her path to getting involved, saying “I moved to Bethlehem in 2010, and I went to [a Citizens’ Climate Lobby] meeting. Of the 20-25 people there, there were a few who were members of the Co-Op. I got to know them, I liked the idea, and I joined, and then I started volunteering.” 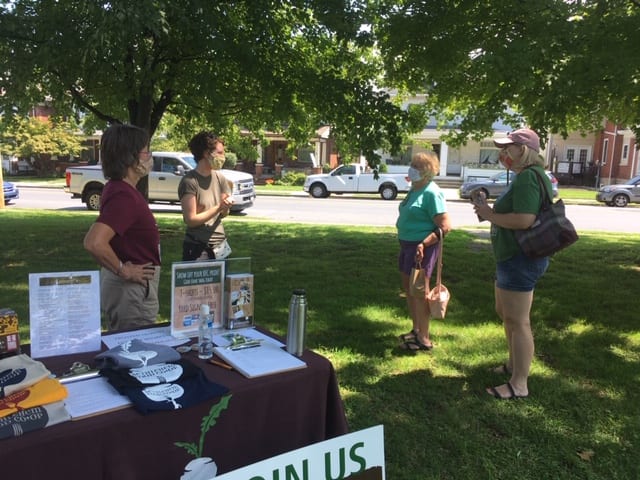 Kathy described how the Co-Op has worked to make membership accessible to as many people as possible, in all types of financial situations, especially during the pandemic. They offer three different payment options: a one-time payment of $300, 12 monthly payments of $25, or 30 monthly payments of $10. Partial and full scholarship opportunities also exist on a case-by-case basis. They have recruited new members through a combination of tabling at events, online outreach, and personal outreach by members to their friends and family. During the COVID-19 pandemic, outdoor events like the Rose Garden and Saucon Valley farmers’ markets have become especially important. “People were so happy to talk about the Food Co-Op. We had 90 new households, mostly from being at the Rose Garden and Saucon Valley farmers’ market this year,” Kathy says.

While members are central to the Co-Op, anyone will be able to shop at the store once it’s opened. As soon as the location is officially announced, the Co-Op will begin their capital campaign, raising funds to get the store up and running through grant money, gifts, member loans, and/or bank loans in addition to the membership equity from the membership fees. This money will allow the Co-Op to build out their store, purchase inventory, and hire a general manager. Once built, the store will fulfill many of the same functions as a typical grocery store, with some notable differences. “We’re all about local,” says Kathy. She explains that while most grocery stores might have 1-2% of its inventory from local farmers and purveyors, the average food co-op sells about 30% of its items from local sources. “We support local small independents first, then go to regional, then national, then international, because you have to have everything – people want cucumbers in the winter, pineapples, avocados, things like that,” Kathy explains. Supporting a local food system first comes with many benefits, including a reduced reliance on processed food, less transportation required, more control of or knowledge of how foods are produced, and creation of more jobs with better pay. The Co-Op also plans to have an extensive bulk food section, including not only dry goods but also soaps and detergents, healthy and beauty products, spices, and beverages like kombucha. People will be able to buy exactly how much they need using reusable containers that they pay a deposit on and then return to the Co-Op for cleaning and sanitizing. The Co-Op’s emphasis on sustainability continues even in the ways people will get to the store. Part of the reason for choosing a location in downtown Bethlehem is to ensure the store is accessible by foot, bike, and bus to promote more sustainable modes of transportation. Maybe the biggest difference between the Co-Op and a conventional grocery store? “We are for community profit, we are not for maximum profit,” says Kathy. While members may receive a portion of the money the store makes, their main goal isn’t to maximize these dividends, but to give back quality food, support for other local businesses and organizations, a healthy environment, educational courses on sustainability and eating well, and a sense of community. 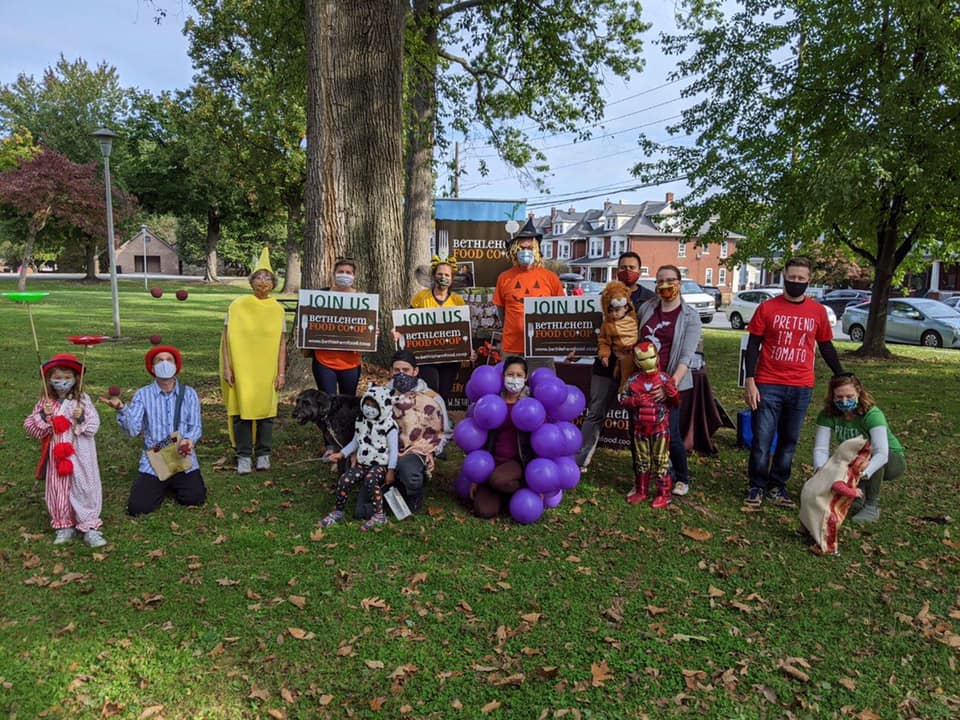 A group from the Co-Op participated in Bethlehem’s virtual Halloween parade in 2020. One of the benefits of joining the Co-Op is meeting like-minded people in your community.

Even before the store opens, the Co-Op is working toward those goals by engaging with the community in other ways. Before the pandemic, they held quarterly meetings for families who were interested in healthy living and being involved in their community at a local Bethlehem school. “We talked about nutrition, asked ‘what would you like to see in a co-op,’ and provided a meal from a local restaurant,” says Kathy. “If people attended 4 of the meetings, and they wanted to, we offered scholarships to join the Co-Op.” Similarly, the Co-Op held an event at Donegan Elementary School with a chef where they created recipes for healthy meals and fed 50 families. They typically hold an annual craft fair and Earth Day celebration where families can see beekeeping and gardening demonstrations, plant their own seedlings to take home, and connect with local artisans. Through social events, they build a sense of community among members while inviting non-members to come see what the Co-Op is all about, often while highlighting a local business or restaurant partner at the same time.

Many of the ideas that will become part of the Bethlehem Food Co-Op, and strategies they have used to this point in their development, came from the experiences of other co-ops in the region, including South Philly Food Co-op, Kensington Community Food Co-Op, Weaver’s Way Co-op, Mariposa Co-op, and Swarthmore Co-op. Some of these groups have been around for over 40 years, working toward providing their communities with quality food while generating environmental, social, and economic benefit. This aligns with the “three pillars,” a widely used model of sustainability wherein all three areas of environment, society, and economy must be strong to hold up the overall structure of a sustainable society. It is this attention to overall community wellbeing, rather than solely economic or financial growth, that makes groups like the Bethlehem Food Co-Op exemplars of sustainability. 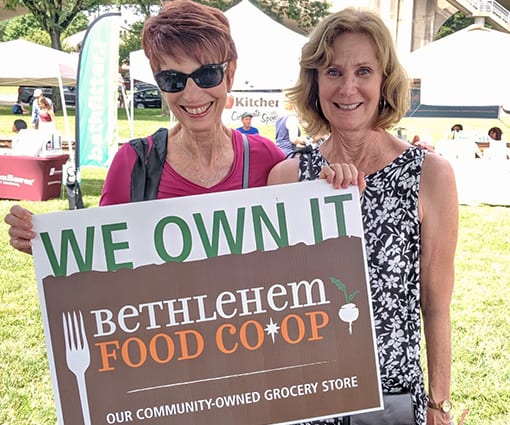