There are many recommendations for sustainable actions one can take at the household level. Many of those involve reducing waste – avoiding single-use items when possible, using the 3 Rs (reduce, reuse, recycle), minimizing food waste, and other oft-repeated suggestions. While I keep these ideas in mind in my daily life so as to not create excessive waste, I haven’t really made a concerted effort to adopt new habits or change my usual habits to reduce the amount of trash I produce. Thinking about what I might do to reduce my footprint, I noted that most waste reduction efforts start with an audit and decided to spend this week tracking my household’s trash. 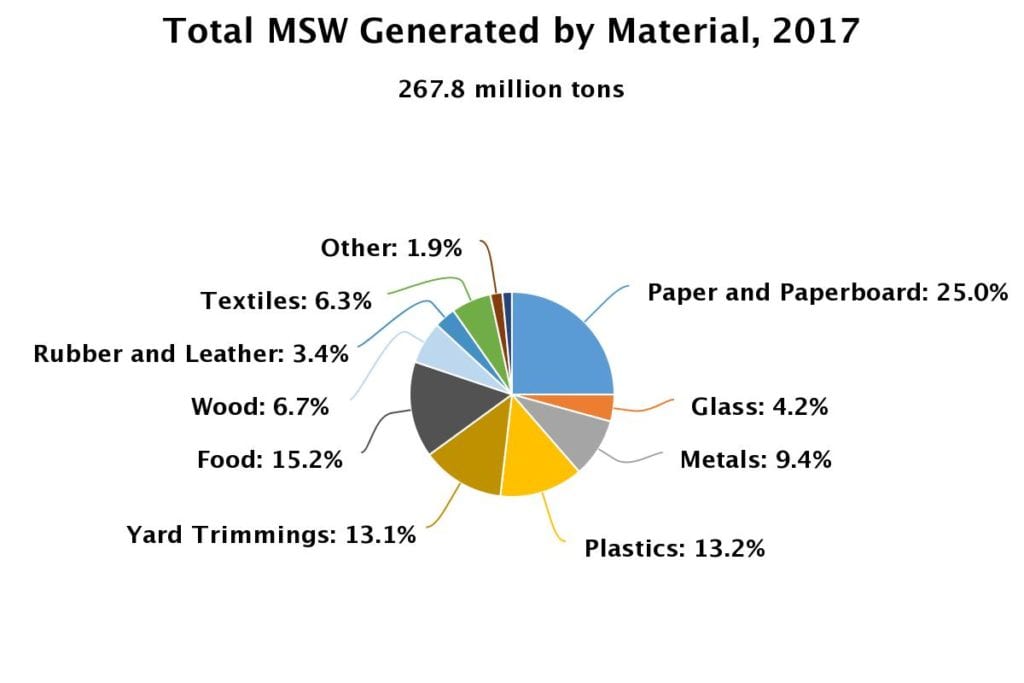 The average American generates about 4.5 pounds of municipal solid waste per day. As shown in the chart above, the largest components of this are paper and paperboard, food, plastics, and yard trimmings. From people’s houses, about 25% of that waste is sent to be recycled and 10% composted. 13% is incinerated with energy recovery, and the remaining 52% is landfilled. That’s about 140 million tons of waste sent to landfills each year in the U.S. alone. While we’ve become accustomed to sending our trash away and not thinking too much about what happens to it after we’re done with it, our refuse can have significant effects on the environment and human health. Plastics in particular get a lot of attention for the environmental harm they can cause and their non-biodegradable nature. Although we lived in a world largely without plastics until about 1950, we have since produced 8.3 billions tons of it – more than the weight of all the people on Earth – and most of what we have produced is still somewhere on the planet today. Reading the book Plastic Ocean made me aware of how ubiquitous plastics are, and made me think about where each piece of plastic (and other trash) I used might wind up.

My household consists of 3 adults, a dog, and a cat. To see how much waste we generate in a week and what materials we throw away the most, I sorted our trash on a Monday evening, before it went out to the curb for pick-up the next day. This was about half of the week’s trash, as it’s picked up twice a week. Recycling is picked up once a week, so I documented the entire week’s worth of recycling on Thursday evening. Finally, we take compost outside as it accumulates, so I documented one container full and estimated that we produce one half-gallon container of compost every two days on average. I didn’t attempt to reduce our waste compared to our typical habits for this week because I wanted an accurate picture of our current waste generation. 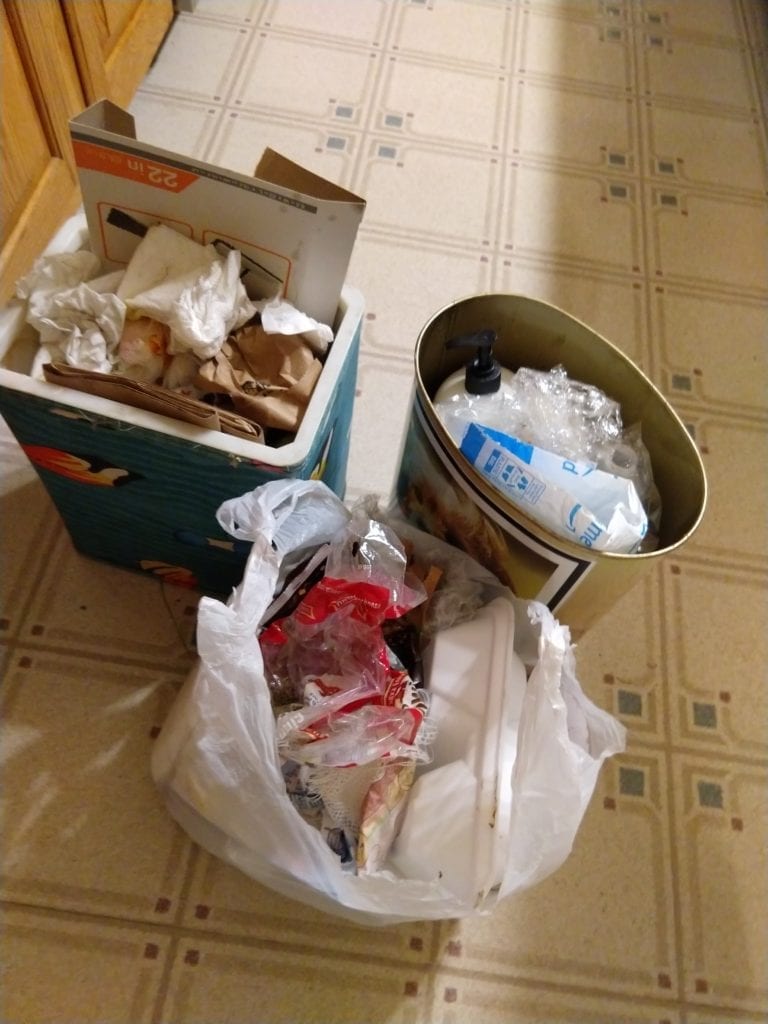 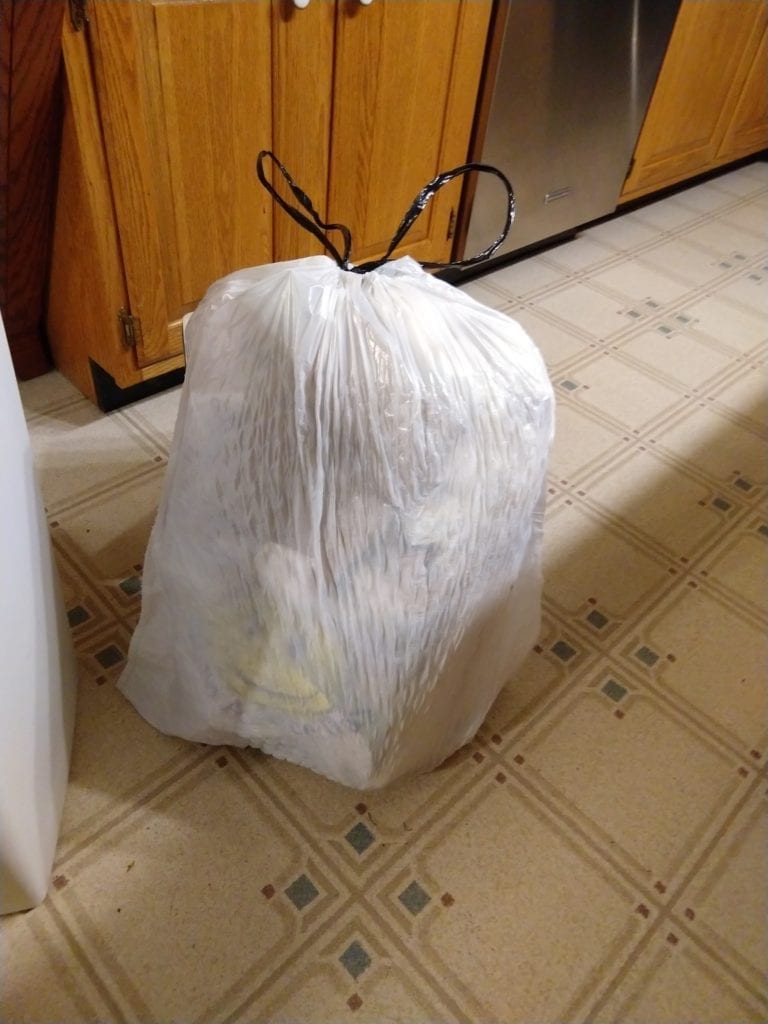 3-4 days worth of trash. On the left, sorted into paper (leftmost bin), plastics (rightmost bin), and food packaging (plastic bag). On the right, all of the trash is aggregated and fills one 13 gallon bag. 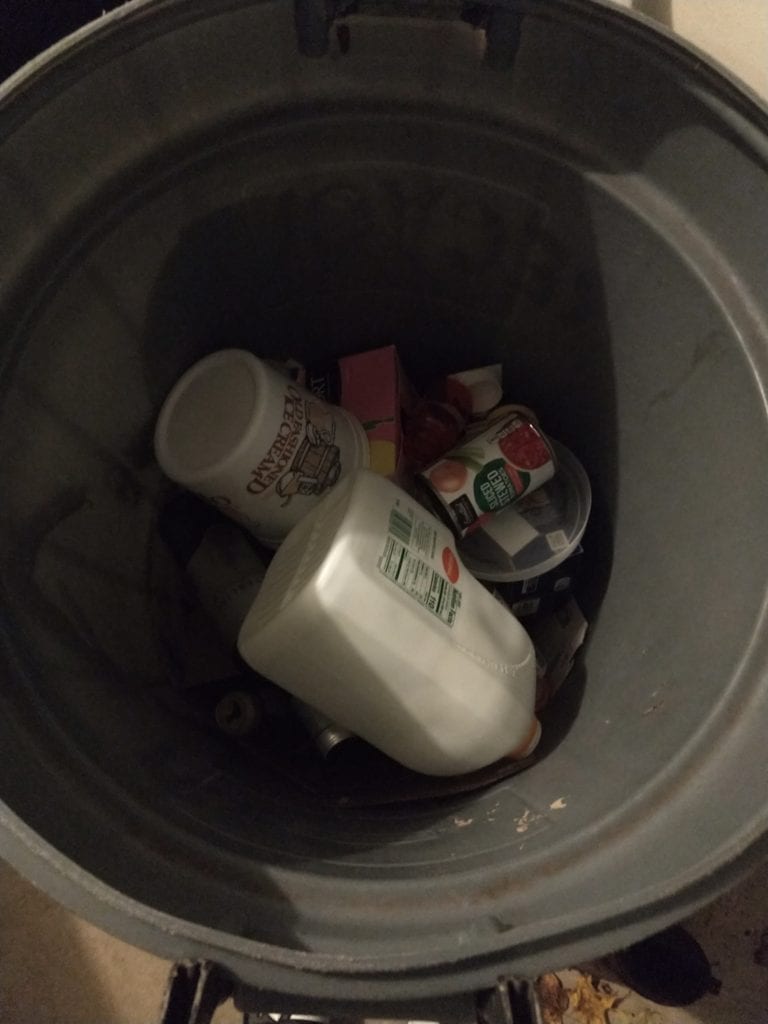 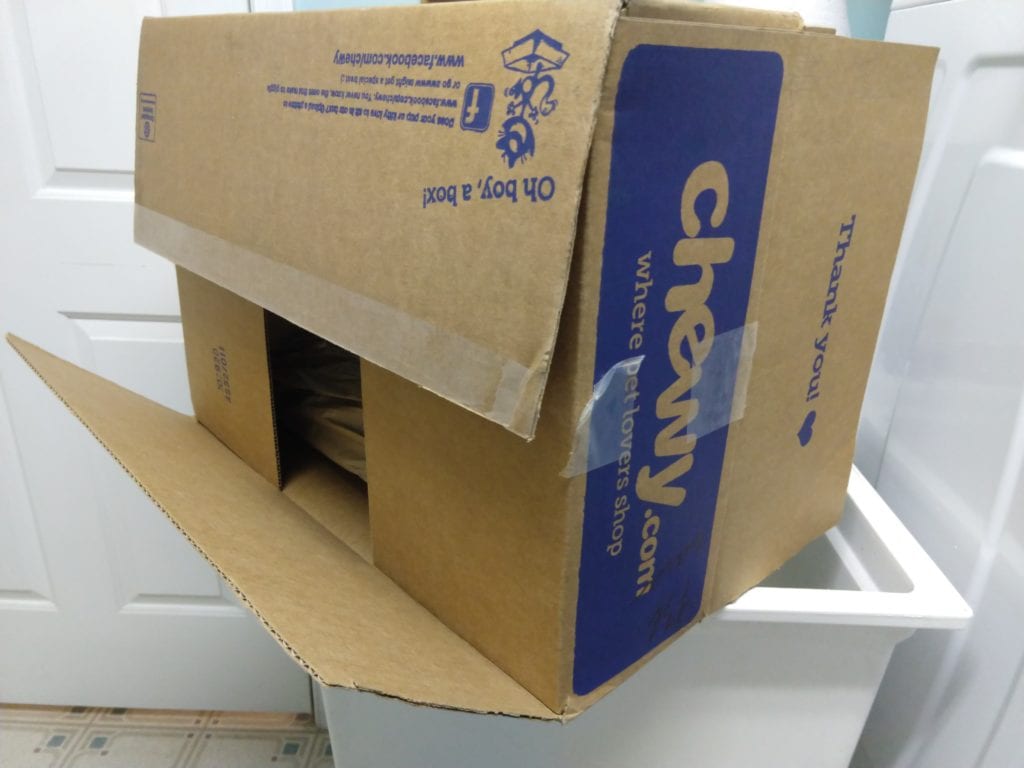 We recycle plastic, paperboard/cardboard, metal, and glass curbside. Paper gets recycled separately at a nearby drop-off location. 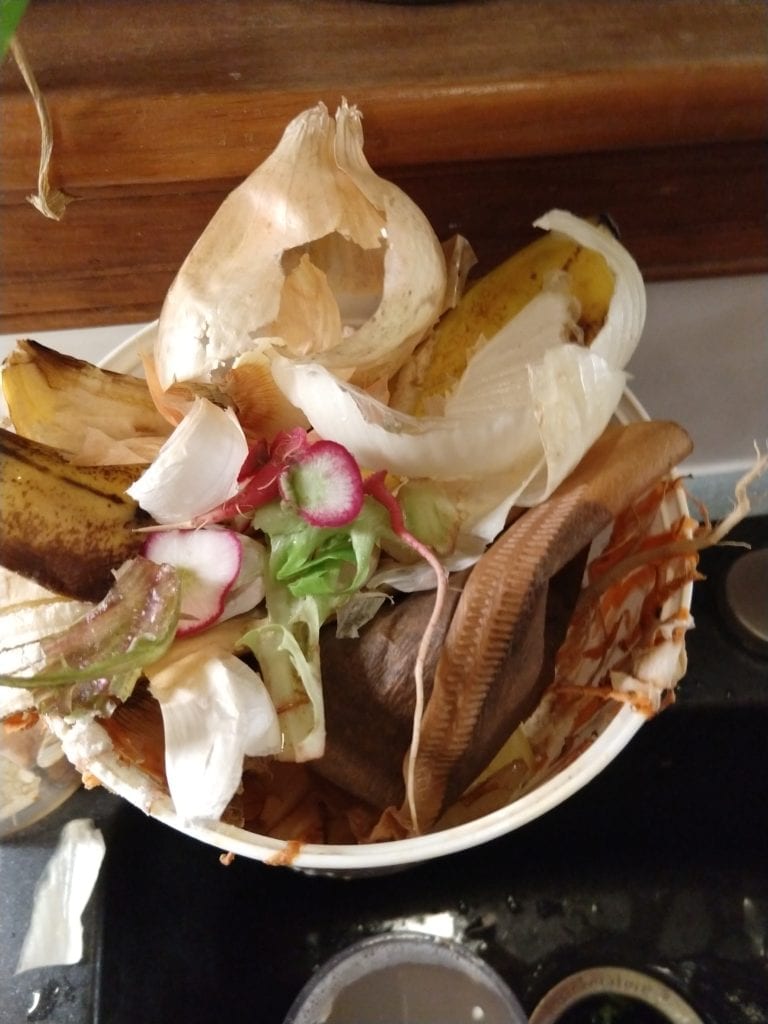 We gather compost in the kitchen for one or two days before taking it outside to our compost bin.

Overall my household waste seemed to align with the national averages from the EPA – paper and paperboard made up the largest portion, followed by plastics and food. One element that differed was lawn trimmings, which were not a significant part of our weekly waste despite being 13% of total American municipal solid waste. It was eye-opening to see the large amount of paper – both recyclable newspapers and packaging and non-recyclable napkins and other products – that we produced. It’s also important to note that while I think this represented a pretty typical week for us, there are also fluctuations in the waste we generate. Around Christmas, for example, there would be more packaging, while weeks when we clean out the fridge would see more food waste.

Lessons and Next Steps

In addition to being interesting, auditing our waste helped me zero in on ways to reduce our impact moving forward. The two things that stood out to me most when going through the trash were the amount of paper products and the recyclable plastic that wound up in the trash. Therefore, I am switching to reusable cloth napkins and trying to encourage my household to use a dishrag or sponge instead of a paper towel to wipe up spills. I noticed that most of the recyclable plastic in the trash came from the bathroom – shampoo bottles and the cases from my contact lenses. To combat this, I plan to add a separate bin or bag for recycling to the bathroom, to remove the barrier of needing to bring an item downstairs from the bathroom to put it in the recycling. 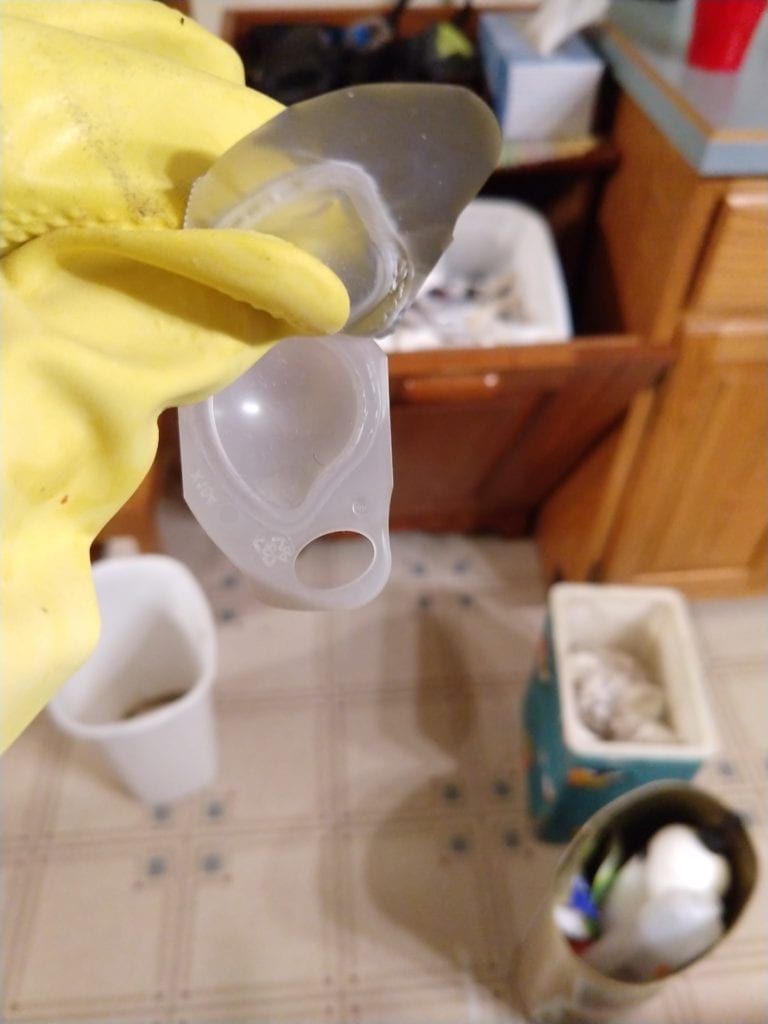 Many of my contact lens cases wind up in the trash. Adding a recycling bin in my bathroom will make me more likely to properly recycle them.

I was particularly concerned about plastic trash before I did the audit since it persists in the environment for so long. Of our non-recyclable plastics, most were food wrappers or other types of packaging. Implementing a solution to this will take a little more research to find food items with biodegradable packaging or no packaging at all. As I noted for a previous post on eating locally, produce and other items from local farmers or farmers’ markets often comes with less plastic, so that is one starting point.

The potential challenges of fully eliminating plastic waste from the products we buy demonstrate that while taking action as an individual household is important, dramatically reducing our footprint depends on supportive policies and structures at the community, state, and national levels as well. Curbside recycling and composting programs are already examples of this type of support that make it easier for individuals to take positive actions. Other ideas to help society move toward a more sustainable relationship to waste include ordinances prohibiting styrofoam takeout containers and single use plastic bags, strategies to reduce the quantity of junk mail one receives, charging companies for the eventual disposal of the products they produce, and better labeling of packaging made with recycled content, among others. San Francisco is one city striving for zero waste and has achieved the highest waste recovery rates of any major U.S. city by implementing these and other programs.

Even if your city’s recycling or waste reduction programs aren’t as developed yet, all levels of action are important, because the actions you take in your own home send a message about what your neighbors should be doing and what you hope policy makers will value in their decisions. In the next Learn by Doing article, I will be carrying out some of the actions I identified to reduce my household waste and evaluating how much the composition of my trash, recycling, and compost changes!  What do you do to minimize waste in your life? What types of trash do you find hardest to avoid?