A changing climate affects bird species through a variety of reasons, from earlier spring seasons, to changes in availability of suitable habitat and food supplies. Climate also affects the swing in extreme temperatures and variability of weather. Weather is particularly important for migrating bird species as it can cause delays or detours in routes. Wind speed is an important factor with easier migration when there is a tailwind. Northerly winds (coming from the north) during spring can cause birds to delay flight for days to weeks. The strength of the wind also matters with speeds over 25 mph not favorable to migration. Most likely migration conditions involve moderate tailwinds in non-stormy weather. Stormy weather or heavy precipitation can result in fallouts when many birds have to land suddenly with not a lot of area to choose from.

If you are looking to see migrating birds, the Cornell Lab of Ornithology puts out a forecast in spring and fall, “Birdcast”, to let bird seekers know when weather conditions will favor their favorite species’ migration. 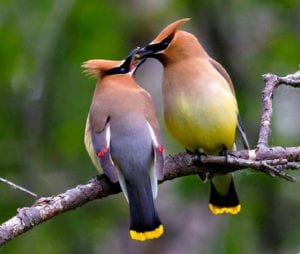 The Cedar Waxwing favors areas near fruiting trees and shrubs, making their homes in edge environment (along streams, woods, and yards). Their migration patterns change year to year and their breeding and wintering areas follow food availability. Their population status is stable and they are projected to have a low risk to climate change impacts, including spring heat waves. While they may lose 36% of their range under a 3℃ warming climate scenario, they gain 41% in areas north into Canada during summer.  In winter, they are expected to remain stable with only 20% range lost and 49% range gained. 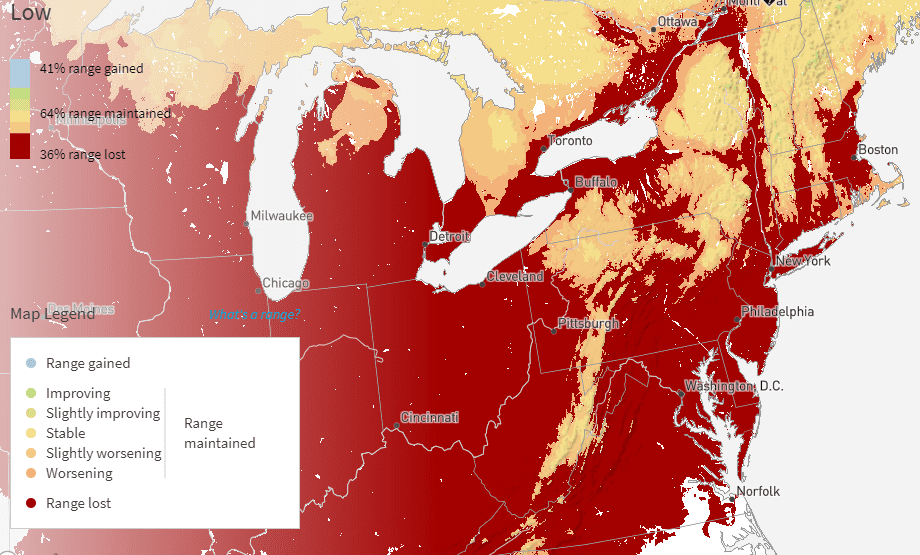 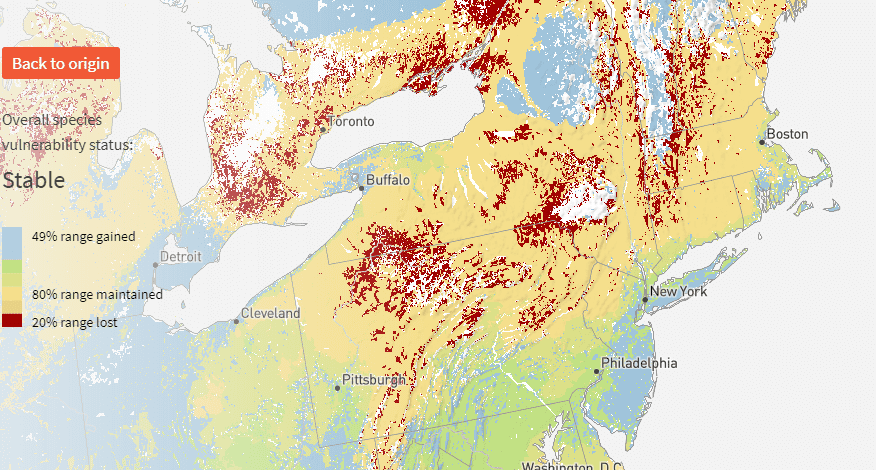 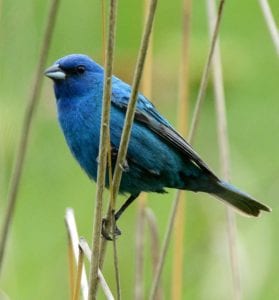 The Indigo Bunting is not a bird species well adapted to urban life, preferring bushy rural areas, old farm fields, and edges of woodlands. They migrate using the stars at night, making their journeys across the Gulf of Mexico in spring and fall. While the species status is currently stable, urbanization and spring heat waves are critical threats to the species, and they are estimated to have a moderate vulnerability to climate change impacts.  Under a 3℃ warming scenario, the Indigo Bunting will lose 33% of its range, mostly in the southern U.S. and around the Great Lakes.  Their range will be maintained in Pennsylvania and they will gain territory north into Canada, essentially shifting their range north in summer. 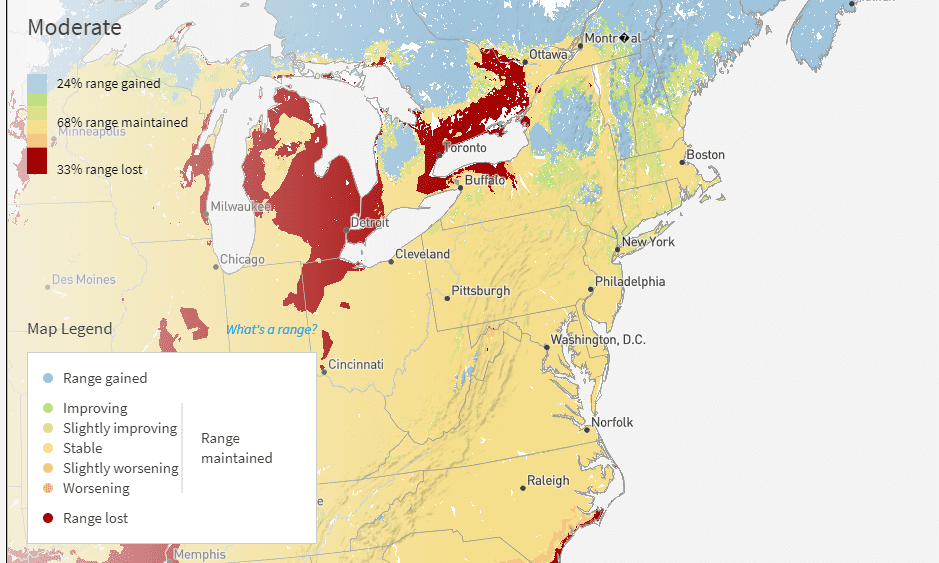 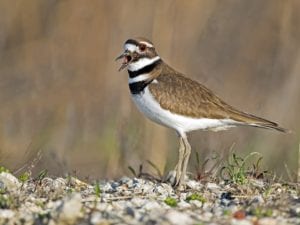 The Killdeer is a common and widespread species that migrates early in spring, returning to northern areas of its habitat range in February and March. It makes its nests around areas near shallow water but also lives in pastures and fields or large lawns. There are population declines localized in urban areas due to habitat loss, as well as detrimental impacts from spring heat waves, but the species is expected to remain stable. Under climate model scenarios, a 3℃ increase due to climate change would result in 7% of its range lost, mostly in southern areas with a gain in range of 32% in northern areas reaching into Canada during summer. 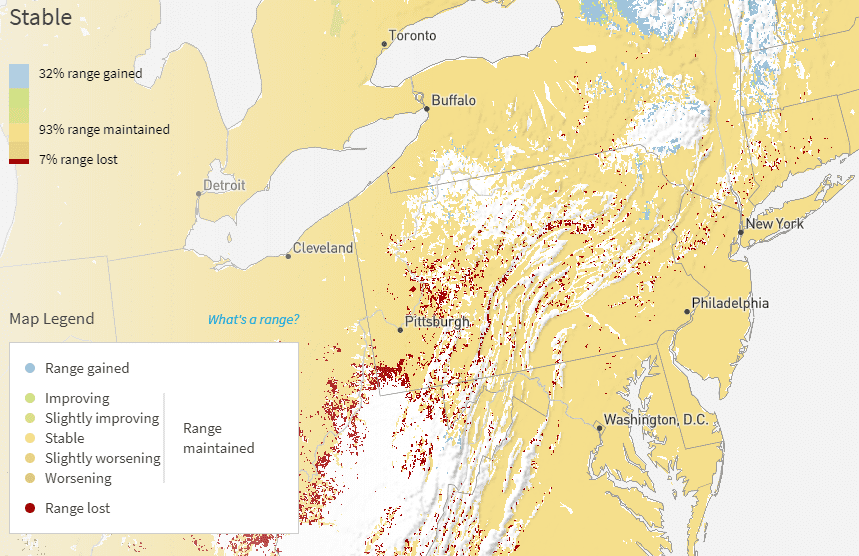 Climate impacts on common bird species in our area (you can filter by most vulnerability to least) https://www.audubon.org/climate/survivalbydegrees/county?zipCode=18042 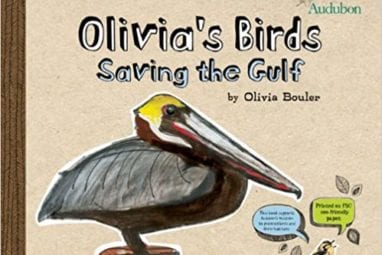 Kids!
You may be interested in this book: Olivia’s Birds – Saving the Gulf 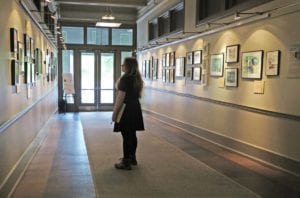 Olivia visited the center a few years ago and gave us all lessons on how to draw birds. Her artwork from the book was displayed in our front hall gallery. 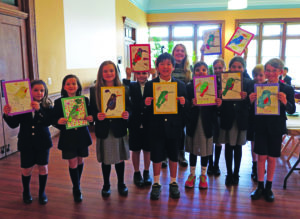 “One 11 year-old girl can make a difference-as budding ornithologist and artist Olivia Bouler has proven, single-handedly raising over $175,000 for the Gulf Coast oil spill recovery. Devastated by the disaster and eager to do her part, Olivia wrote a letter to Audubon, “11 years old and willing to help” offering her own bird paintings to raise contributions for Gulf recovery efforts. The idea took flight, and Olivia proceeded to send out over 500 paintings, many of which are captured in this lavish picture book that recaps her valiant campaign to save birds affected by the spill.”
A 2012 Parents’ Choice Gold Awards winner!

This book is available at Nurture Nature Center and through online booksellers.

Are you looking for a professional learning experience to rejuvenate you? We are looking forward to the Summer Institute for Climate Change Education with Climate

Are you looking for a professional learning experience to rejuvenate you? We are looking forward to the Summer Institute for Climate Change Education with Climate Generation, a virtual conference full of powerful and engaging keynote speakers, meaningful discussion about the intersection of social justice and climate change, and collaborative conservations between a national network of climate change education leaders.
This three-day experience will include networking with a national audience, as well as one full day dedicated to working, planning, and learning with regional cohorts. On-screen time will be segmented, with the opportunity to choose which sessions you would like to attend.
Hosted in partnership with NOAA Climate.Gov and The Wild Center’s Youth Climate Program
Discounted $150 Registration for PA educators. Scholarships available. 20 Hours of Continuing Education.

NNC will be closed today during our regular open house hours. Please join us again next weekend.

NNC will be closed today during our regular open house hours. Please join us again next weekend.