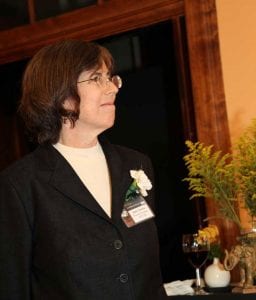 Stanley founded the Nurture Nature Center, Inc. (NNC) in 2007 as a Pennsylvania based nonprofit and she currently serves on its board of directors and is president of the organization. She was instrumental in obtaining the seed funding for NNC, staffing it, procuring a facility for its operation and helping to formulate its vision.

As the organization has grown, she continues to provide daily support on every aspect of its operations, including legal, financial and policy matters. During her tenure, NNC has become a leading voice nationally in communication of risks associated with flooding, and has also established a thriving center devoted to community education on environmental issues and risks.

In connection with her non-profit work, Stanley has also served since 2008 as president of Easton Hotel Restoration. This wholly owned subsidiary of NNF converted a long abandoned, ten-story building in Easton into a thriving hotel that brought new life to the city, helping to turn the tide away from sprawl with its fatal consequences for the environment.

Prior to taking on her current responsibilities in the nonprofit world, Stanley practiced and wrote primarily in the area of pension and welfare law. She served as Senior Editor of The Employee Benefits Law Treatise of the American Bar Association, the leading reference source for lawyers on fiduciary responsibilities under ERISA, and subsequently as Editor in Chief of its annual 1000-page supplements.

Join us for a discussion about the Bushkill Creek and its water flow with Dr. Dru Germanoski, Professor of Geology at Lafayette College. Join the meeting

Join us for a discussion about the Bushkill Creek and its water flow with Dr. Dru Germanoski, Professor of Geology at Lafayette College.

Have you always wanted a place to talk about interesting new ideas in science? Or find out more about a particular science topic?

Nurture Curiosity – a science café for curious minds.
An informal virtual event with engaging discussion on a variety of timely science topics.
Come bring your thoughts, questions, and ideas.
Learn, converse, and virtually meet others who are inquisitive.

Join us to hear from keynote speaker Gary Szatkowski, meteorologist, OurWeather US, LLC: “Watching the Weather: Lessons From the Past, Visions for the Future.” Then, discuss local hazard and a

Join us to hear from keynote speaker Gary Szatkowski, meteorologist, OurWeather US, LLC: “Watching the Weather: Lessons From the Past, Visions for the Future.” Then, discuss local hazard and a community vision for resilience with other residents and leaders. Please register online at https://attendee.gotowebinar.com/register/8992328768983106315
After registering you will receive a confirmation email containing information about joining the webinar as well as a link to an online mapping exercise. Participants who complete the online mapping exercise, the forum discussion and a brief survey afterwards, will receive a $50 gift card for their time and input.