The floods of 2004, 2005 and 2006 along the Delaware River brought about tremendous changes for many of the affected communities.  They also were the impetus for the creation of Nurture Nature Center.

Repetitive, major flooding took place along the Delaware River three years in a row, with major damage occurring to many riverside communities. At the time, Nurture Nature Foundation, a non-profit organization founded by prominent attorney and mediator Theodore W. Kheel (1914 – 2010), was conducting most of its environmental charitable work in New York City where it was headquartered.  But NNF also happened to own a historic building (now known as the Grand Eastonian Hotel & Suites) in Easton that was impacted by the floods. Knowing that extreme weather events were becoming more frequent, Kheel wondered if NNF should dedicate some of its resources to addressing the issue of flooding generally. He looked into the matter, and quickly learned that nationwide there was a startling lack of resources for communicating with the public about floods, presenting a serious unmet need. So work began. 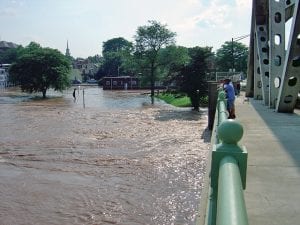 Much of the initial work involved learning from and speaking to communities along the Delaware River that were impacted by flooding, and developing flood education tools to help them and others. In addition, NNF dedicated a building in Easton to the work, now called the Nurture Nature Center, and helped set up a Pennsylvania nonprofit named Nurture Nature Center, Inc. to run programs out of the building and provide a local base. The stories of the initial work on flooding, and the ensuing development of our first programs for the building, are told in greater detail elsewhere on this website, where we remember our early years. What ultimately grew out of Kheel’s idea and these early efforts is the Nurture Nature Center of today, a multifaceted institution, where research of national importance is conducted, and a rich array of educational and community programs is offered. 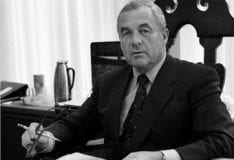 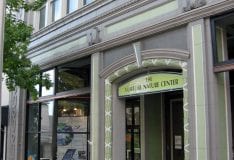 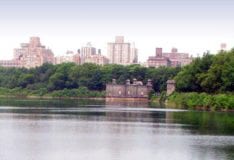