“One Hundred Years at 518 Northampton Street”, an exhibit celebrating the 100th anniversary of the building, was created by artist Tom Maxfield for the occasion.

The Strand Theatre opened on May 8th of 1915 in the newly-constructed Odd Fellows Building at 518 Northampton Street. On the theatre’s program were recent silent films, then known as “photo dramas.” Surprisingly, the films often changed daily but were sometimes repeated months later. Click here for a list of movies shown at the Strand Theatre. 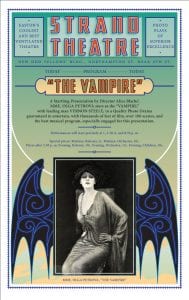 Pictured at left is a modern movie poster highlighting a film that showed on August 26th, 1915, “The Vampire,” starring acclaimed actress Olga Petrova.

The movie scene of 1915 saw a few vampire films released, some made in Europe and featuring extravagant costuming. In an interview, the undramatically-dressed Mme. Petrova stated that actresses should rely more on acting, rather than costuming, to convey the emotional content of horror films.

I. O. O. F.
The Vanderveer Social Club of the International Order of the Odd Fellows, built the present structure at 518 Northampton Street and owned the building until 1963. The I. O. O. F. Hall was erected on the site of the Jacksonian Club House, then listed as 516 Northampton Street, and also known as the Old Garden Cottage.

The station experimented with other formats such as “hillbilly,” popular contemporary and big band styles. In subsequent years WEST changed locations and management. It operates today at 99.5 FM and plays, with its sister station, WHOL, Spanish language programming.

The VFW continued to operate on the premises for more than six decades, occupying the lower level of the building during the last few  years, after the property was acquired by Nurture Nature Foundation in 2004. Over the years, the VFW held many patriotic activities for veterans and young people. They erected a flag pole in front of the building and maintained it throughout their stay. The American Flag was proudly displayed, reminding Easton of the sacrifice and dedication of our veterans.

Carl E. Weller & the Weller Speedy Iron Soldering Gun
During the 1930s and 40s a part of 518 Northampton Street was also occupied by a radio repair shop. Its proprietor was Carl E. Weller, the inventor of the Weller “Speedy Iron” (a.k.a. “Speed Iron”), one of the earliest soldering guns.

The inspiration for the soldering gun, as reported by Popular Science in an article from 1963, was the difficulty for repairmen of keeping soldering irons constantly hot during the workday, as well as waiting for usable temperatures from heating a cold iron. This could be quite daunting and time-consuming for repairmen who operated small shops.

Several inventors had worked on the problem, but Weller was the first to construct a reliable, fast-heating model. In 1946 he was able to secure a patent on its construction. Manufacture of the gun led to the formation of the Weller Electrical Company, which later became Weller Manufacturing.

Those plans changed when flooding damaged major parts of Easton in 2004, 2005 and 2006. After witnessing the devastation, Kheel came up with a new vision for the building, and the current Nurture Nature Center was born. To read about its history, click here. 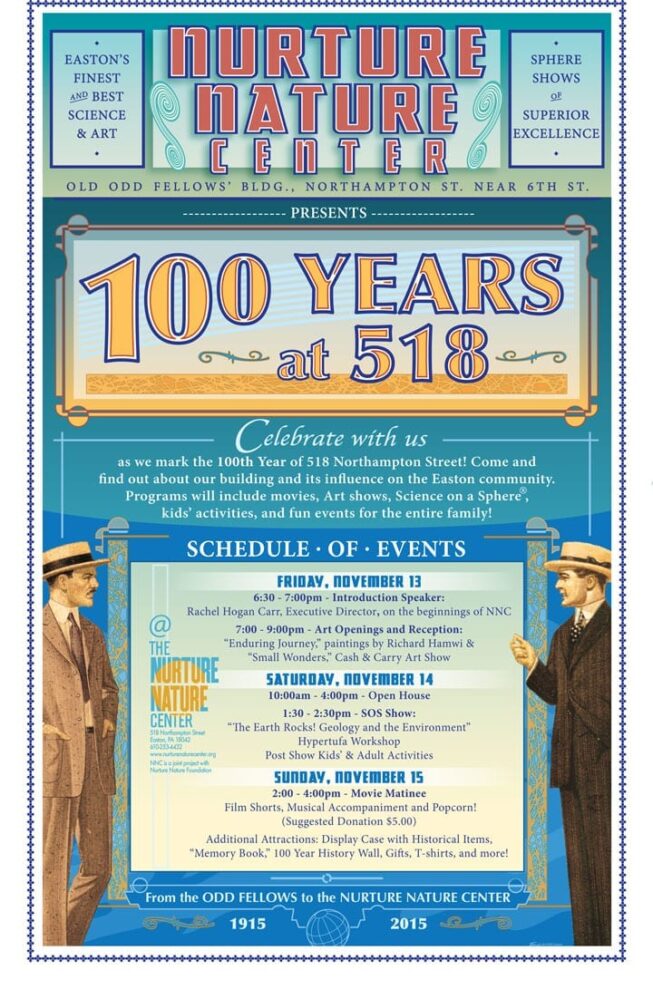 Love the combination of science and art!

This place is fantastic.

They had a great summer program my kids loved. And the globe, sand table and artwork were all super interesting for my kids and I. Staff was wonderful and very engaged with us.

What a wonderful community resource! Beautiful building, excellent, knowledgeable staff. The combination of science and the arts goes hand in hand, making the Nurture Nature Center an inspiring experience.

The best part of Nurture Nature Center is the feeling of connectedness that you take away from every visit.  The programs celebrate what John Muir called the ‘thousand invisible cords’s that cannot be broken’ —...

A jewel in our city…

A wonderful space for dialogue around community, science, and creativity.

Took a class yesterday. We had so much fun. What a wonderful place. Thanks!

We took a field trip to the Nuture Nature Center today with Connections Academy. The program was very educational and interesting. We want to go back when they have the planet program! The “sphere” is...